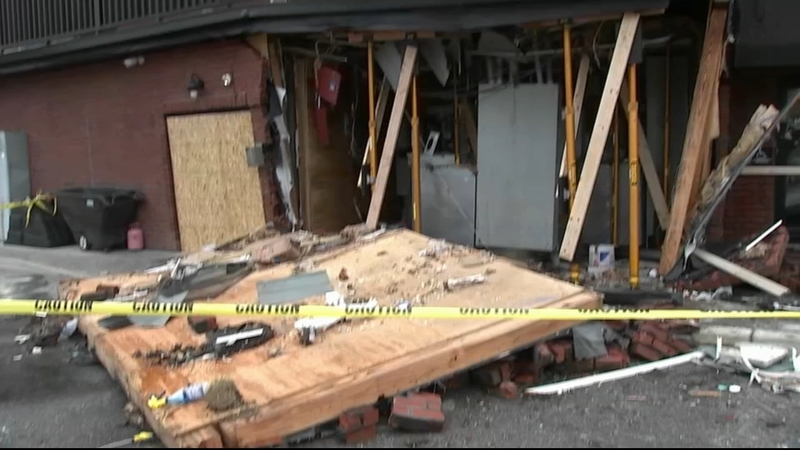 KENNETT SQUARE, Pennsylvania (WPVI) -- Pieces of brick, glass and metal were still piled up in the parking lot of Victory Brewing Company nearly 12 hours after what witnesses described as an explosion.

Some residents were home when a bang sounded and fire erupted around 6:30 p.m. Monday.

"All of a sudden the building splits open, and a fireball shoots out of the corner," said resident Zach Hansen.

Firefighters quickly evacuated everyone from the building.

No one was inside Victory Brewing, since the taproom was closed at the time of the incident. The inside of the taproom appeared to be largely in-tact.

The Red Cross offered assistance to residents who weren't allowed to stay the night in their apartments.

Firefighters continued to investigate a cause.

Some wonder whether a ruptured gas line is to blame.

Officials have not said if that was the case nor have they confirmed that an actual explosion occurred.

The morning after the fire, curious neighbors came to see the damage, thankful that no one was hurt.

"It's very tragic, and it's unfortunate that it happened," said Hayden Blomgren of Avondale, Pa. "I hope they can reconstruct it fairly quickly so Victory isn't affected."

"Tonight, around 6:30PM there was an explosion and fire in the 600 block of (West Cypress Street) in the building where the Victory Brewing Company - Kennett Square taproom is located. Our taproom was closed for business today, so no customers or team members were in the building at the time of the incident. We now have a team on site and are working with the fire and police departments to gather information around this unfortunate incident. We are not aware of any injuries that were uncovered during the initial investigation. We will continue to work with authorities and with the Red Cross to learn more about what occurred this evening and how we can help our neighbors in the building who have been displaced. For now, we are praying for the safety of those involved and want to thank the first responders who quickly arrived on site, safely aided in the evacuation of the building and are working to control the fire."
Report a correction or typo
Related topics:
kennett square boroughbreweryexplosionfire
Copyright © 2021 WPVI-TV. All Rights Reserved.
FIRE
Delaware rowhome blaze kills 2 men; injures firefighters
3 firefighters hurt battling South Philly blaze
4 treated, including firefighter, following rowhome fire in Manayunk
Officers' heroic efforts to save man from fire caught on video
TOP STORIES
Tracking downpours, localized flash flooding Thursday
Philly shootings leave 2 dead, 6 hurt on Wednesday night
'Give me my food': Woman pulls gun while in line at Chipotle
'Aunt Mary Pat' opens up about fight with anxiety, depression
FDA backs Pfizer COVID-19 boosters for seniors, high-risk
117 PSU students temporarily suspended for missing COVID-19 tests
Search resumes for Brian Laundrie in Gabby Petito case
Show More
Ben Simmons says he's done with the Sixers. What will the team do now?
Residents rally for safer options after neighborhood rec center closes
Harper's throw to plate saves Phillies' 4-3 win over O's
SEPTA investigating after employee punches a man
FIFA visits Philly as it determines World Cup host cities
More TOP STORIES News