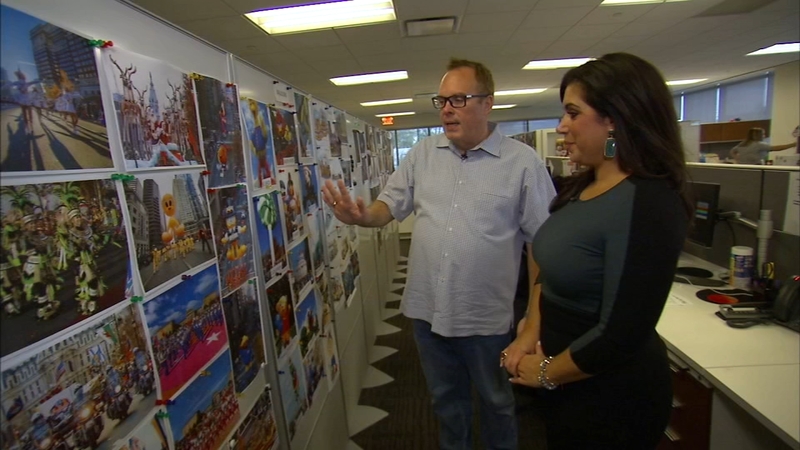 Behind the scenes of the 100th 6abc Dunkin' Thanksgiving Day Parade

PHILADELPHIA (WPVI) -- As 6abc prepares for the 100th Thanksgiving Day Parade, the team is putting the finishing touches on the centennial celebration.

That team, which will grow to about 200 people, is right here in the 6abc studios, in a parade office on the second floor.

They've been working hard on this 100th lineup for two years now, and we are giving you a special behind the scenes look.

"This is command central. This is the mothership," says John Best, the supervising producer. "Most people don't realize that 6abc not only produces the broadcast, but they also produce the parade."

The team pulls in parade royalty from all over the country.

"We bring actually a lot in from Florida, who work for Walt Disney World, who have experience in live parades," Best says. "And they've been with us for 21 years parades."

Best loves a parade and has been producing them all over the country for 25 years.

He let us in on some of the shiny new additions this year. Think fireworks!

"Daytime pyrotechnics at the top of the art museum steps," he says with delight.

"We are so excited that the Ferko String Band is going to kick it off, representing the Mummers," Best says.

There are new characters.

"We are very excited to have 60-foot Big Bird balloon that's coming," he says. "Shrek is going to be making an appearance this year."

"We're making a 'Hermey The Elf' balloon," he says, reminiscing about the holiday classic 'Rudolph the Red-Nosed Reindeer.' This is going to be brand new and it's actually going to premiere in our parade. It's never been seen anywhere. It's built just for us."

"This year we're actually going to open the finale with Santa talking to the children and bringing us back in time 100 years ago when the parade started," Best says. "Bring tissues."

You can count down to 100 with us by following 6abc.com/parade and facebook.com/6abcthanksgivingdayparade.

There you can find flashbacks, previews, and prizes from Dunkin, every day.