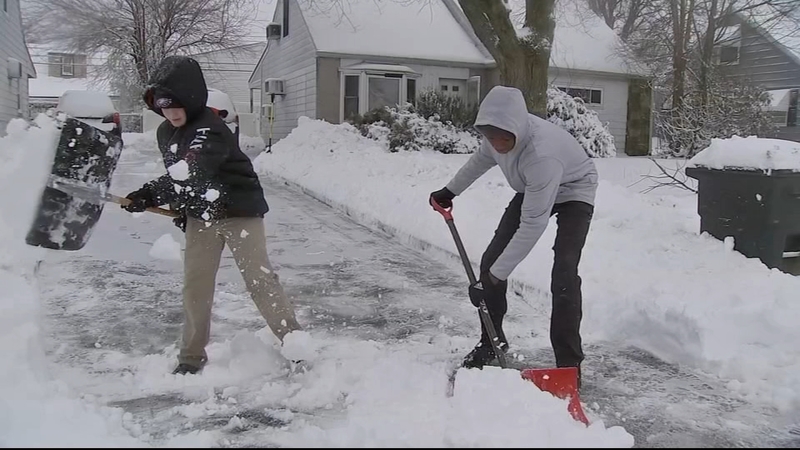 PHILADELPHIA (WPVI) -- The City of Philadelphia announced the snow emergency has been lifted as of 12 p.m. Tuesday.

Officials said crews will continue salting and plowing until roads are made passable for safe traveling across the city. Parking is now permitted again along snow emergency routes.

Flakes continued to fly Tuesday as 7.8" of snow accumulated in the city.

Bustleton Avenue remained snowpacked, as side streets like Gifford Avenue were riddled with piles of snow that made it hard for drivers to navigate turns.

One driver in a minivan struggled to gain traction as it spun around on Bustleton.

The Philadelphia Streets Department had already warned that, despite deploying 450 pieces of snow equipment on the roads, crews wouldn't be able to make the streets perfect.

"Our goal is to make the roads as possible and return the city back to its normal operations as quickly as possible," said Philadelphia Streets Commissioner Carlton Williams. "This does not mean our roads will be completely clear of snow and ice but are made passable for safe travel."

Chioke Hansom of Wynnefield said he's grateful for his four-wheel drive as he watched other cars slip and slide along different roads.

"The residential roads definitely need to be plowed. I've seen way too many roads in the back streets that haven't been touched yet," Hansom said on Monday night.

The storm rolled in Sunday, but crews started brining roads on Friday in preparation. By Monday morning, ruddy snow had accumulated on residential roads, despite crews' best efforts.

Art museum steps the place to be during Philadelphia snow days. Christie Ileto reports for Action News at 5 p.m. on Feb. 1, 2021.

Dozens of delays and cancellations were reported at Philadelphia International Airport. Travelers are urged to check with their airlines before heading to the airport. SEPTA also encourages people to use public transportation and keep an eye on the schedule via social media or the website.

Ramon Santiago knows all too well that when the snowflakes start falling he has to start shoveling.

"I don't want it to accumulate. I see that it's getting icy and it's getting heavier. The first time I did it this morning, it was a lot lighter," said Santiago.


During the day on Monday, many residents were out and about in Overbrook Park, but not everyone was happy to be outside.

"It's a mess out here. It's ice, coming down like crazy, slipping and sliding. I say just be careful, be safe," said Stephanie Howard of West Philadelphia.

And while some kids were taking advantage of the fluffy powder, other workers were trying to keep everyone safe. Kennyatta Brown was shoveling in front of her storefront in Overbrook Park.

"I just didn't want anyone to get hurt," said Brown. "I know it's not a part of my initial job description, but I don't know, it's pretty."

As night fell and the snow piled up on the roads, the spinning of tires could be heard throughout the city.

Nonprofits like Chosen 300 in Spring Garden braved the elements to provide meals during the storm.

"If they're counting on us, we want to make sure that we're here for them," said Brian Jenkins, Chosen 300's executive director.

Philadelphia residents must also clear a path on their sidewalks that's at least 3-feet wide within six hours of the storm ending.

Shoveling snow in the winter might seem routine, but it can be dangerous if not done correctly. Follow these tips to prevent injuries in the winter months.

It's something Zach Ward worked on early as he tried to clear the snow accumulating in front of his home in Manayunk.

"This street always gets pretty bad. So we have to do what we have to do so our neighbors can go up and down," he said as he shoveled.

Shoveling isn't just a task for Stephen Mathews. It's his job, and he says there's one thing that residents can do to make the job easier for themselves.

"I'd say use a metal shovel. Not a plastic one. It's a little bit icy, it's going to freeze," he said.

-Do not shovel or plow snow into the street. This practice is illegal, unsafe and hinders snow operations. The penalty for violating this can range from $50 to $300 for each violation.

-Clear a sidewalk path at least 36 inches wide within six hours of the end of the storm.

-Trash will not be picked up on Monday. Anyone who has track pickup on Monday should hold their trash until next Monday 2/8

City Buildings Closed: Due to the snow emergency, City of Philadelphia government offices are closed to the public again on Tuesday, February 2.

Sanitation and Recycling Collections: Sanitation Convenience Centers will resume operations on Tuesday, February 2 with normal hours of 8 a.m. - 6 p.m. The centers are open through Saturday. Visit philadelphiastreets.com for locations.

Information for Businesses: All property owners and/or tenants are responsible for clearing a 36 inch path on all sidewalks, including curb cuts, abutting the building or premises within six hours after the snow has ceased to fall-even if the establishment is temporarily closed due to snow or COVID-19 restrictions. A fine of $50 or more can be imposed in violation of this code.

Establishments with outdoor dining need to take additional precautions. All outdoor dining setups should be secured, removing as much of the setups as possible-including tables, chairs, heating equipment, temporary structures. As noted in the City's winter guidelines for outdoor dining, the City is not liable for any damage from plowing or snow removal, even if structures are permitted. Materials should be cleared from the right of way as much as possible to avoid possible damage and blocking of dining setups. Restaurants with unpermitted structures are reminded that their establishment is liable for any injuries suffered due to damage from the structure during and after the storm.

Food Sites: There are changes in distribution, with many sites closed Tuesday, February 2. The City is updating phila.gov/food with changes as they are available

Learning: The School District of Philadelphia has announced that learning will be all virtual on Tuesday. Archdiocesan high schools and parochial elementary schools in Philadelphia will also be virtual.

Free Library of Philadelphia: The Free Library will be closed for in-person services and materials pick-up on Tuesday, February 2. The Free Library's virtual programming and call center 1-833-TALK FLP (825-5357) will be open.

PHL International Airport: Travelers and those picking up travelers are encouraged to check their flight status and road conditions before leaving for the airport tonight and Tuesday. Call your airline, get updates at 1-800-PHL-GATE (745-4283), or check the PHL International Airport website-phl.org. The airport has brined onsite roadways, with snow removal and deicing operations planned for the duration of the event.

Call Centers Open: The Philly 311 Call Center will remain open during normal business hours on Monday and Tuesday (8 a.m. - 8 p.m.) to take calls for non-emergencies. Requests for salting and plowing will not be taken during the storm. Once the storm has moved on, the City will announce when such requests will be taken.

The Philadelphia Water Department's customer contact center (215-685-6300) will be open. Residents are encouraged to shovel snow from the fronts of fire hydrants and storm drains on their block to allow snow melt to drain to the city sewer system.

Homeless Outreach: The Office of Homeless Services issued a Code Blue on Wednesday, January 27 at 3 p.m., and it will remain in effect until further notice. Throughout the Code Blue, Philadelphia's homeless outreach teams will patrol the streets in greater numbers, urging individuals experiencing homelessness to come indoors and avoid prolonged exposure to the elements amid dangerously cold temperatures. People do not need ID to enter shelters, and they can remain indoors throughout the duration of the Code Blue. If you are concerned about someone who is homeless, please call Homeless Outreach at 215-232-1984 at any time.

Pet Safety Awareness: Residents should contact the ACCT Philly hotline (267-385-3800 ext 1) if they observe a dog outside during extreme cold (aside from bathroom breaks and short walks). It is against City ordinance to leave dogs outside in extreme cold without proper shelter, and owners can be fined up to $500.