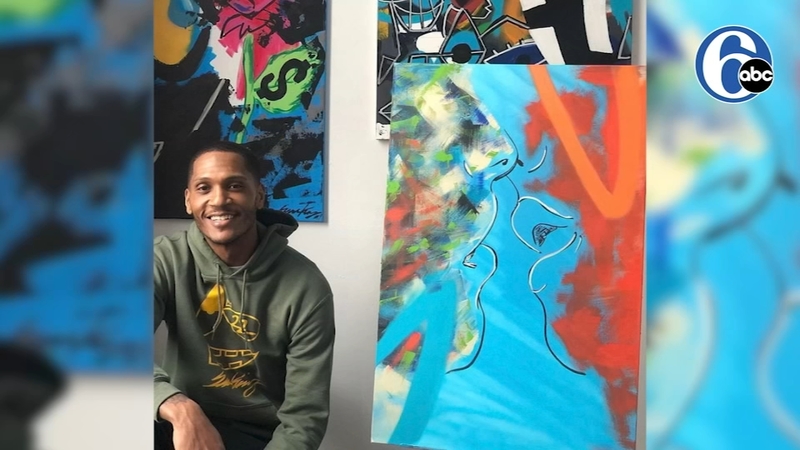 The former collegiate basketball athlete once pursued a professional career in South America but later found his true passion existed with his paintbrush.

"Art was always like the first love of mine," said Kinsey. "As I transitioned from playing collegiate basketball and playing overseas sometime, I came back home and just realized what my true love was and a way to give back."

Reflecting on his childhood, where he would paint over his uncle's sneakers, Kinsey begin painting many designs around fashion and canvas art in and outside the city.

That later led to the creation of his art brand 'Vision 22' which symbolically stands for "Inspiration For Creation."

"Vision 22, that meaning comes from my mother's birthday, which is July 22, which is symbolic for inspiration for creation," he said. It's like a little tricky slogan. If you spell that out, it's 22 letters total."

Kinsey combined his fashion and mural arts passion into a brand that serves and connects with multiple realms of art.

His talent helped him reach bigger platforms, working through fashion brands, businesses, and nonprofits to find their inspiration through art.

"From nonprofits to big brands, to major companies like Bloomingdales in King of Prussia. Painting murals in California, to having numerous shows in North Carolina. It's just been a major blessing for me. It's also my way of giving back to my community." said Kinsey. "Just making people happy and spreading love and positivity."

Kinsey is also very active in his community and makes an effort to give back by hosting several local exhibitions and free youth workshops.

His main desire is to create a program geared towards the youth and help teens from a similar upbringing express themselves through art.

"My ultimate goal, somehow some way, is to have a center or some type of program for kids into the arts and need an outlet," said Kinsey. "Kids who are left behind, who don't play sports. Where people like myself can just be themselves."

Kinsey says that the youth matters and they are the future, so it's important to focus on them.