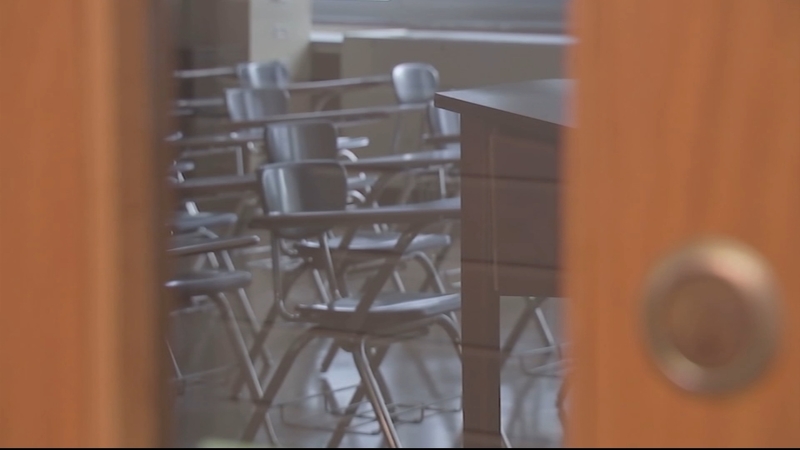 Union tells Philly teachers not to go into buildings Monday

PHILADELPHIA (WPVI) -- The union representing teachers in the School District of Philadelphia is telling members not to go into the buildings on Monday over COVID-19 safety concerns.

Jerry Jordan, the president of the Philadelphia Federation of Teachers, sent an email to members Friday saying they "should not go into buildings on Monday, but should continue to work."

"I believe that you can do your job remotely," he continued.

Some 2,000 teachers were expected to return Monday to prepare for hybrid learning, which is set to start on February 22.

The union said there are still many unanswered safety concerns, including questions over the use of fans for ventilation, and the lack of vaccines for teachers.

In a statement, Superintendent Dr. William Hite said the move was "deeply disappointing."

"This action directly impacts our efforts to support the more than 9,000 PreK to second-grade families who want their children to return to school buildings for in-person learning," he said.

The school district previously said it has spent around $4 million in improving ventilation efforts, though the exact dollar amount spent on the fans wasn't made clear.

Jordan has invoked the union's previously agreed upon ability to call in a third-party expert to decide whether or not buildings are safe enough to return.

In Friday's email, Jordan said the union expects to hear from the neutral third party this weekend.

Action News spoke with teachers who taught inside Rowen Elementary and have children who attend the school.

The teachers said it's harder to teach virtually than in-person, but they want transparency from the district before they return to their classrooms, including pictures of proper ventilation, and pictures of sneeze guards and other the precautions.

"We feel that the School District of Philadelphia has not taken our concerns seriously," said Felicia Atwell, a 3rd grade teacher at Rowen.

Until then, they said they do not believe it's safe to return.

"It shouldn't just be one school that you show us where you put a fan in," said Karen Williams, a 4th grade teacher at Rowen, and a parent of two children at the school.

The Commonwealth Association of School Administrators standing with PFT, although they still want their administrators to show up to school Monday.

However, the president of CASA told Action News some administrators are in Philadelphia schools every day, and they do not want to see hybrid learning until everyone can be vaccinated.

"We're having a difference of opinion on what's safe, and what safety looks like," said Dr. Robin Cooper, the president and principal officer of Teamsters local 502 CASA, regarding the district's stance.

Many parents Action News spoke with said they will not let their child in school until they get full transparency from the district.

"We need shared accountability for our children, and our leaders shouldn't be pulling a fast one convincing us that this is safe," said Maya McGeathey, a parent of a child in the Philadelphia school district. "And their current actions have just perpetuated the distrust that the people have in the system."

Other parents said they feel it's safe for their children to go back to school.

"I think it's really hard for that age, 5 years old, 6 years old, to get what they need over a computer. They can't type," said Amy Blumenthal, the parent of a kindergartener in the Philadelphia school district.