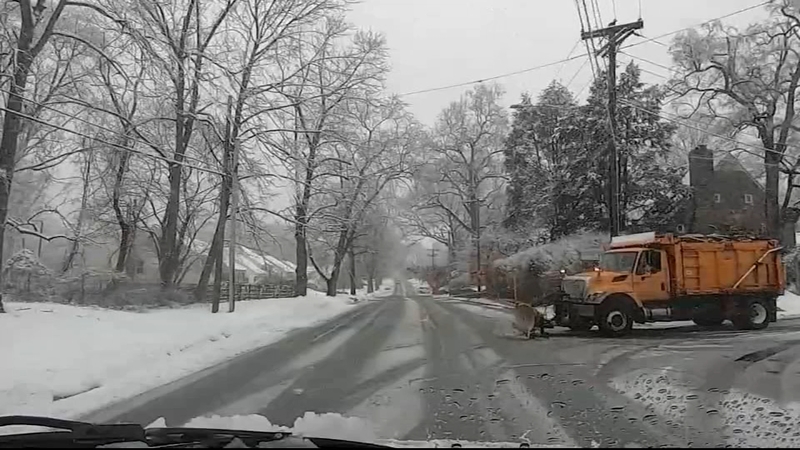 WEST CHESTER, Pennsylvania (WPVI) -- Another round of wintry weather hit the Philadelphia region on Sunday morning, dumping almost a foot of snow in the suburbs of the city.

The storm comes as many residents are still digging out from Monday's nor'easter.

"This time it hasn't been so bad with the shoveling, so far, so I'm enjoying that too," said Tori Perko of Westtown Township.

Chester County officials say they're watching the roads closely because the initial snow hasn't melted yet.

"Typically we have accidents, we've had none today. The big thing is our snow emergency began at 8 a.m. this morning (and) continues until 8 a.m. tomorrow morning. We need residents to get their vehicles off those snow emergency routes where they're subject to get ticketed or towed," said Dave March, the public information officer for West Chester fire and police.

Send us your videos and photos from the snow at 6abc.com/Share

And while some people hear "snowstorm" and think of inconvenience, 14-year-old Rocco Falgiatore thinks "opportunity."

"I bought a tractor with the snowplow on it so I figured I would snowplow with it and it turned out great. It's the first year in a while that we've gotten snow," said Falgiatore.

This week alone Falgiatore has shoveled and plowed nine driveways. He's saving up to buy a truck for his future business.

"The roads in Jersey were good, all the main roads. It's a little tricky over here in this area in Hatboro and Horsham, but as long as you take your time, everything's good," said Ed Runyen of Cinnaminson, New Jersey.

"I've been having no problems. Just keep my distance and break early. That's all you really gotta do, and make sure you got some good tires," said Blake Banks of Willow Grove.

The P.J. Whelihan's in town was getting ready to open, it's normally a busy night because of the Super Bowl.

"It should've been. I don't know how many people are going to want to come out at this point. We're open for to-go and Door Dash and stuff, so hopefully, we'll be busy with that," said Manager Steve Bobinski.

In Doylestown, where 7.6 inches of snow was recorded, residents were hard at work shoveling.

"It's so much shoveling. I live on the corner and I have the sidewalk that goes all the way around. It's so much work," said Clint Flack of Doylestown.

"You know it's awful, but the kids are having fun. We don't have to go anywhere anyway based on the pandemic, so it sort of helps keep us inside," said Ira Katz.

The AccuWeather team says to be on the lookout for frozen slush and black ice early Monday morning due to bitter cold temps overnight.