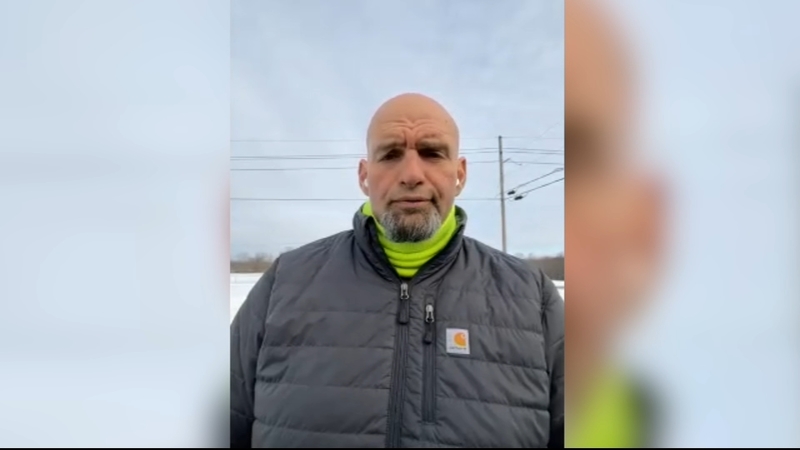 HARRISBURG, Pennsylvania -- Pennsylvania Lt. Gov. John Fetterman on Monday officially kicked off his campaign for the US Senate seat that's coming open with Republican Sen. Pat Toomey's decision not to seek reelection in 2022.

Fetterman, a Democrat, was elected to his current position in 2018, on a ticket with Gov. Tom Wolf, after a failed Senate primary bid in 2016. Before becoming lieutenant governor, Fetterman spent more than a decade as the mayor of Braddock, Pennsylvania, just east of Pittsburgh in the western part of the state, where he burnished his reputation as a no-nonsense, gruff progressive political champion.

The announcement, a few days after Fetterman filed the paperwork to begin the process, marks the beginning of what is expected to be a crowded and competitive primary campaign in a state President Joe Biden won in 2020 but that remains a stronghold for Republicans loyal to former President Donald Trump. In an evenly split Senate, the race could play a decisive role in determining the chamber's balance of power in next year's midterm elections.

Fetterman's campaign says it has already raised more than $1.3 million, from over 43,000 donations, in the weeks since he first publicly considered the bid.

"I'm running for the United States Senate for the same reason I ran for Lieutenant Governor in 2018 and Mayor of Braddock 16 years ago, because I believe in a set of core truths. I believe in the dignity of work and the dignity of a paycheck," Fetterman said in a statement.


Fetterman endorsed Vermont Sen. Bernie Sanders in the 2016 Democratic presidential primary -- and had Sanders' backing in his 2018 campaign for lieutenant governor -- but stayed neutral in 2020, telling the Philadelphia Inquirer last year, "It's 100% about uniting Democrats behind our eventual nominee against Trump. Because it's absolutely going to be all hands on deck."
Biden ultimately won the state by more than 80,000 votes, flipping it back to Democrats after Trump defeated Hillary Clinton by about half that margin four years earlier. The coming Senate primary will provide new insight into the state's evolving electorate -- and how Democrats view their road to victory in the 2022 Senate election.

Thank you to the 37,000 grassroots donors who stepped up.

Other candidates rumored to be eyeing the race include Rep. Conor Lamb, a moderate Democratic House member also from western Pennsylvania. Across the state, Philadelphia Mayor Jim Kenney, state Sen. Sharif Street, state Rep. Malcolm Kenyatta, and US Rep. Chrissy Houlahan, among others, could end up vying for the lion's share of the heavily-Democratic vote in and outside Philadelphia.

Fetterman, though, is the only member of the pack to have won election statewide.

Political analyst Terry Madonna says there are two things about Fetterman's candidacy that might make other Democrats shy away. Namely, the fact that he has built-in, statewide, notority as lieutenant governor and the fact that he has already raised $1 million for his campaign.


"Perhaps it will have the effect of limiting the number of people who seek the nomination. Certainly, the nomination on the Democratic side," Madonna says.

As for the GOP, no one has formally declared his or her candidacy, but some of the Republicans, whose names are in the discussion, include Congressman Brian Fitzpatrick, former Congressman Charlie Dent and State Senator Mike Regan of York County.

But with so much at stake with Toomey's soon-to-be-vacated seat, Madonna says expect fireworks during both primaries.

"We'll have to wait and see, but I think it's going to be a pretty fascinating set of primaries for both parties," said Madonna.

In a video posted Monday to kick off the campaign, Fetterman makes the case that he is uniquely qualified to win over parts of the state that shifted toward Republicans during the Trump era.

"These places across Pennsylvania feel left behind. They don't feel part of the conversation," Fetterman said. "That's why Donald Trump went to these small counties and held these big rallies. We cannot afford to take any vote for granted, we cannot afford to take any place for granted."
Report a correction or typo
Related topics:
politicsharrisburgsenatepoliticspennsylvania politics
More Videos
From CNN Newsource affiliates
TOP STORIES