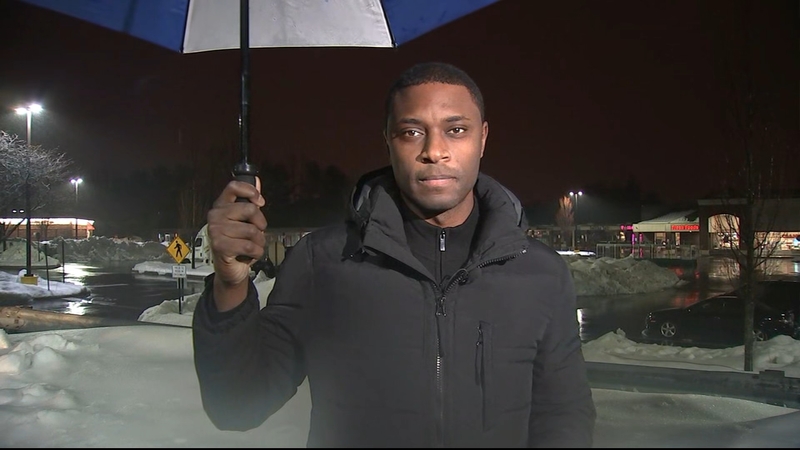 In South Whitehall Township, there was ponding on roads in parking lots due to the steady rain.

PennDOT crews have been salting roads all over the Lehigh Valley and say they'll continue to do so until the rain moves out.

Around 4 a.m., PennDOT lifted vehicle restrictions on the following roadways:

- US 22 in Lehigh and Northampton counties; and

- PA 33 in Monroe and Northampton counties.

With an Ice Storm Warning in effect Monday night, many residents said they've had enough of winter.

Residents in western Pennsylvania should be on alert as an Ice Storm Warning remains in effect through Tuesday morning.

"My goodness, we're getting a winter event every two days here in Bethlehem. So during this ice storm, I'm taking it easy. I've been shoveling all the snow from the last winter event. I guess I'll have to do a lot of shoveling or de-icing tomorrow morning," said Steve Samuelson.

While snow looks beautiful, some business owners said it's hurting their bottom line.

"Terrible. We have a lot of takeout orders, that's it," said Alex Ramsay of Mama Nina Restaurant. She said the thought of everything covered in ice isn't a good one.

"Nobody wants to come outside. Everyone is scared to drive," added Ramsay.

PennDOT said the focus of combating this storm is about making roads as safe as possible for the work commute Tuesday. Officials said if you can, try to stay home.

"We really want people to just maybe think about, 'Do I really need to go at my normal time? Can I wait two or three hours? Can I work from home for the day?' " said PennDOT spokesperson Ron Young.

Over in Allentown, we saw a similar scene. Things were pretty quiet. In fact, huge mounds of snow still line the streets from the storm two weeks ago.
The winter weather has been great for Anthony Derkits. He maintains the parking lots for several area businesses, but he also said the storms are getting old.

"It's great for business. It's just, it's starting to wear you down," said Derkits who owns Ground Up Landscaping Service.

In Pottstown, residents were stocking up at Lowe's ahead of the storm.

"I got four bags of regular rock salt and one bag of calcium chloride for concrete," said Tom Croissette of Hereford.

"It was an ice skating rink. You couldn't even walk in the street," said Lou Grimaldi of Roxborough.

Monday night's storm comes after an already icy weekend for most in the Philadelphia region.

"It was an ice skating rink. You couldn't even walk in the street," said Lou Grimaldi of Roxborough. "I always check the temperature. If it's 32 or above, there's so much salt out here, it's usually ok. Once it gets below that, be careful."

"Despite all the ice, we're open seven days a week," noted Alyssa Kayati of Rose's Water Ice in Roxborough.

The National Weather Service offers the following tips to prepare for ice storms and minimize their impact:

- Put together an emergency supply kit before the storm hits

- Trim weak or damaged branches around your home

- Don't park your vehicles under trees

Meteorologist David Murphy explains the differences between sleet and freezing rain and the dangers that come with both.