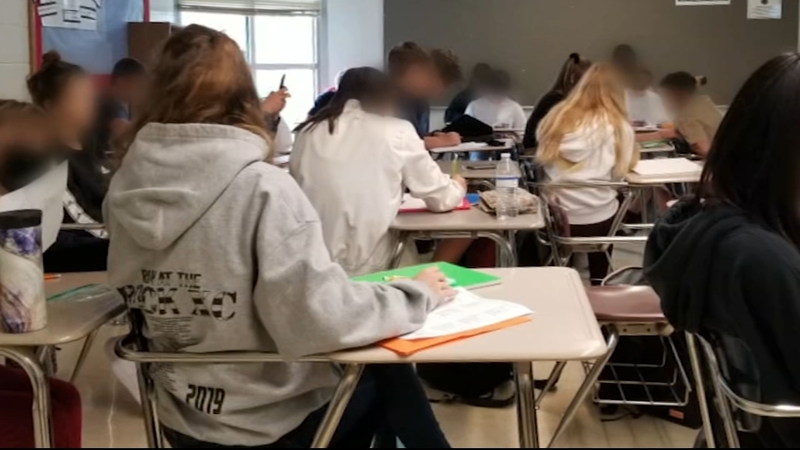 PHILADELPHIA (WPVI) -- Mental health experts warn the pandemic has had a tremendous impact on the mental health of many students.

Data is now being made public, and the findings show a nationwide trend that kids are suffering.

The data also suggests a generation of kids are exasperated by the pandemic, including the 15-year old son of Heather Matt.

"A lot of anger and lot of frustration for sure," said Matt. "He definitely has depression issues."

Matt is worried her son may try and harm himself.

"Every single day, all day long, and I am out of the house full time," she said.

Nicole Hockley is the co-founder of Sandy Hook Promise and worries what isolation could lead to.

"We know that teen suicide is huge. And we've seen that the tips on that surging since COVID hit a year ago," Hockley said.

Hockley lost her son Dylan in a mass shooting in Connecticut.

The group partners with states and school districts to create a downloadable app, hotline, and website where students can anonymously report an issue with a classmate.

"I'm actually very nervous about this year's return to school," said Hockley. "I don't want to think of it as a powder keg, but I sometimes do. The violence hasn't gone away, the self-doubt, the insecurities, the bullying, but it's been exacerbated by extreme isolation and lack of connectivity."

Hockley says nationwide, while overall, hotline tips are down, imminent life safety tips like suicide, bullying, and self-harm have exploded.

The calls are up 133% since the pandemic began, officials say.

Pennsylvania's version of the Sandy Hook Promise tip line, Safe2Say, has seen a similar spike, up 118%.

But even more, so recently it has received about 100 more tips a week.

"We've seen a dramatic spike in the number of overall tips since students began learning in person over the last several weeks across Pennsylvania," said Pennsylvania attorney general Josh Shapiro.

He says it's time for the government to step up to recognize the mental health challenges facing today's youth.

"I've called for the placement of a mental health counselor in every single school in Pennsylvania," he said. "It's one of the reasons why we've engaged with parents directly to try and help them spot signs of trouble with their students."

The Matt family says they would like that, as they've had trouble finding help and considers moving to a district with full-time in-person learning.

Experts say warning signs that your child could be struggling include severe isolation, cutting off friends and family.

They advised focusing on dialogue where your child can be open and honest, and you can be understanding.
Report a correction or typo
Related topics:
health & fitnessphiladelphiachildrenaction news investigationmental healthinvestigation
Copyright © 2021 WPVI-TV. All Rights Reserved.
More Videos
From CNN Newsource affiliates
TOP STORIES