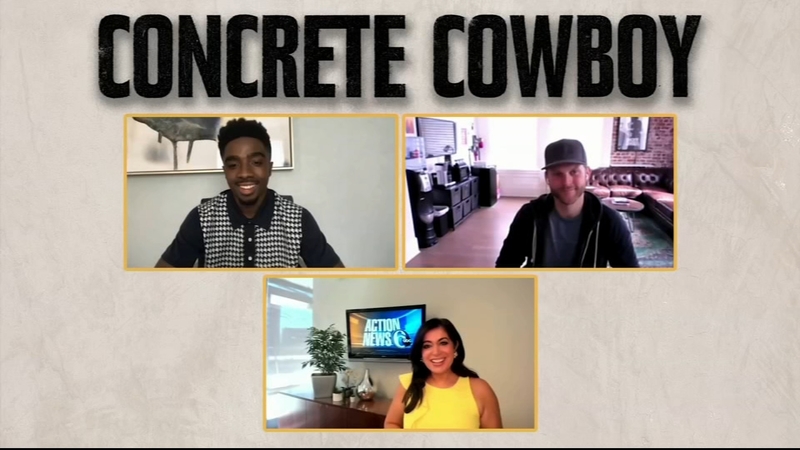 PHILADELPHIA (WPVI) -- North Philadelphia's urban riding club is getting the Hollywood treatment. They're the focus of a new movie being released on Friday.

It's all about the sense of community, and important life lessons learned at the stables and on the streets.

"Concrete Cowboy" was filmed in North Philadelphia, on Fletcher Street, and shines the Hollywood spotlights on its century-long tradition of Black urban cowboys.

I had a chance to chat with the cast, the local director, and the real-life riders about this cinematic love letter to a city treasure they're fighting to save.

"So many people don't even know that this is here, that it exists," said actor Caleb McLaughlin. "Even the Philly natives don't know, so it was a privilege to understand it."

McLaughlin plays Cole, a troubled teen sent to live with his father, played by Idris Elba.

"It's a part of American history, it's a story that people haven't told and I want people to understand the community and the relationship between son and father and man and horse," McLaughlin says.

The stars soaked in all of the living history while filming here on Fletcher Street.

"There wasn't a day that we didn't learn something new and then try and put that into the film so it felt as authentic as possible," says Elba.

Director Ricky Staub is from Philadelphia.

"Obviously it's visually magnificent to see a horse riding through the hood in Philly, so as a filmmaker that was a that was a draw," Staub says.

Erin Brown started riding on Fletcher Street when she was 6. She's known as the Concrete Cowgirl.

"If it weren't for horses, I honestly don't know where I would be," Brown says. "I never thought it would be my career, but here I am."

Brown is now the executive director of the Philadelphia Urban Riding Academy, fighting to keep the tradition thriving and free for local youth.

"It's not only a confidence booster, it gives them some sort of recreation to make sure they're not on the streets," Brown says.

Staub and his production crew are now spearheading fundraising efforts, knowing how vital it is.

The goal is to work with the city officials and the Parks and Recreation Department to build an official facility.

"The history of the urban black cowboy is being washed away slowly from each of these backyard stables," Brown says.

"We're just hoping to bring everyone under one roof and move forward.

Staub became personally attached to these riders and their mission.

He started the GoFundMe to help move this forward.

"We understand this culture," Staub says. "It's beautiful and it's special and it's something that we should revere and preserve."

Brown was also on the set for the filming of "Concrete Cowboy," helping preserve the authenticity of the project.