'The People v. The Klan': Inside the case that bankrupted the Klan 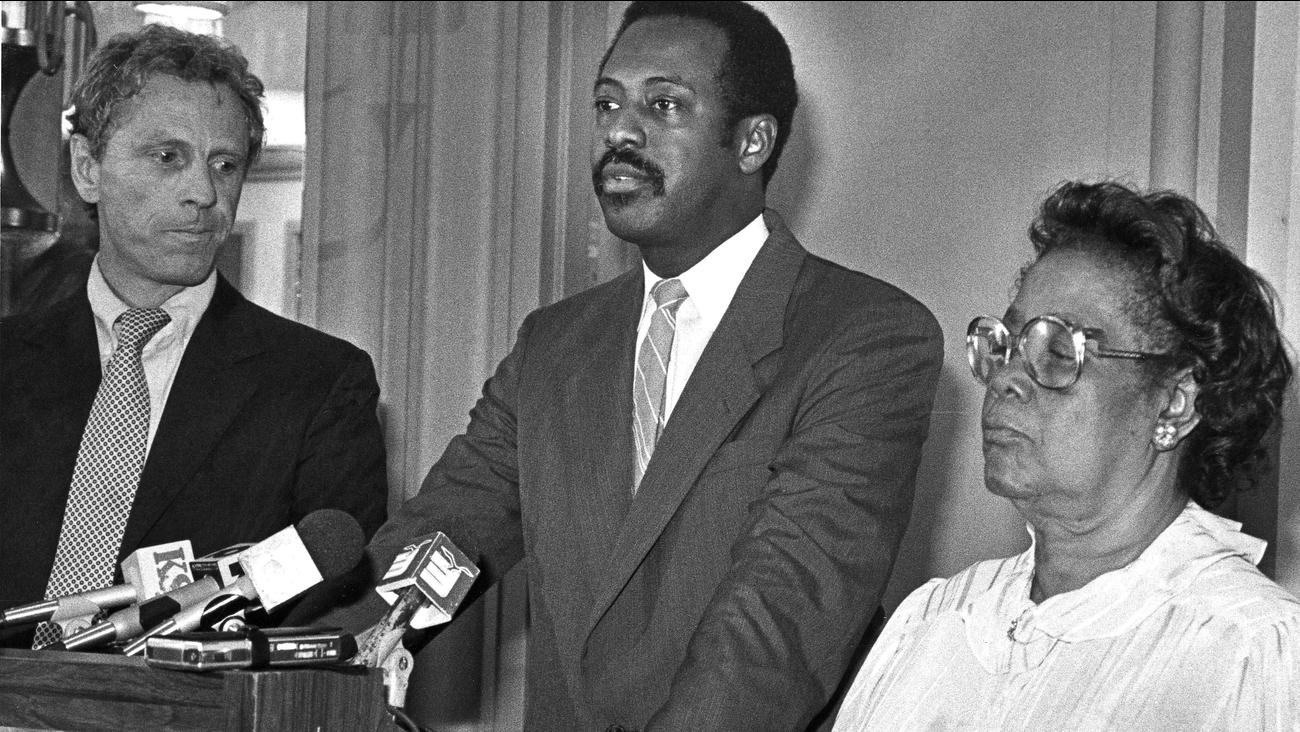 At first, Cecelia Perry thought she knew what happened to her younger brother when he failed to return from a late-night trip to a service station on March 20, 1981.

Nineteen-year-old Michael Donald was thoughtful and responsible -- working at night and watching Perry's oldest son during the day. He'd been with Perry at another sister's home in Mobile, Alabama, when he stepped out around 11 p.m. to pick up cigarettes. As the hour grew later with no sign of him, "everybody assumed that he'd gone home to my mom," Perry says in CNN's docuseries, "The People v. The Klan."

But Michael wasn't there. While out on his errand, the teenager was abducted at gunpoint by two members of the Ku Klux Klan, who viciously beat, killed and then lynched the teenager. The next morning, Michael's body was found hanging from a tree on the residential Herndon Avenue.

The racist hatred that led to Donald's death and his mother Beulah Mae Donald's fight for justice is explored in the CNN Original Series, "The People v. The Klan," airing Sunday at 9 p.m. ET/PT.

Here's a guide to the key events in the lynching of Michael Donald and the cases that followed.

In the CNN series, Michael Donald's sister Cecelia Perry describes her brother as quiet and well-mannered. The youngest child of Beulah Mae Donald, he worked in the mailroom of the Mobile Press-Register and was studying to be a brick mason.

"If he came home and I was lying down, he'd do, you know, little things to help," Perry says.

He spent his last night alive with his family, watching a basketball game.

"We were all gathered at my oldest sister's house, Betty," Perry recalls. "We would always sit around on Friday night, 'cause she lived right round the corner from my mom. ... My niece Vanessa said, 'I need some cigarettes.' Michael said, 'I'll walk up there and get 'em.'"

While out walking, Donald was stopped by two White men in a vehicle asking for directions. It was a ruse -- once Donald paused to help, one of the men produced a gun and forced Donald into their car.

The two Klansmen, Henry Hays and James "Tiger" Knowles, then took Donald to a secluded location where they beat him, strangled him and cut his throat. They then took his body back to a residential area of Mobile, where they hung his body from a tree.

That night, members of the same local Klan chapter also burned a cross on the lawn at the Mobile County courthouse.

Word spread quickly through Mobile about the lynching as police arrived on the scene. Donald's wallet was found in a dumpster, with an ID card inside identifying the body that hung on Herndon Avenue as Michael Anthony Donald.

Police learned that day that Klansmen were in the area; Bennie Jack Hays, the second-highest-ranking Klansman in the state, owned the property across the street from where Donald's body was found.

"Nobody saw anything, nobody heard anything," former Mobile homicide detective Wilbur Williams says in the CNN series. "We just started investigating everything we could."

Police arrested three men they believed to be involved in Donald's death: Ralph Eugene Hayes and two brothers named Jimmy and Johnny Edgar (a trio that, as it would turn out, had nothing to do with it). The three had been involved in a domestic disturbance a few blocks away, and a tipster named Johnny Ray Kelly claimed to have seen the men in the area that Friday night.

Kelly told police he'd noticed what looked like blood on Hayes' clothes. Kelly said he asked Hayes about it, and that the man responded that he'd "jumped a Black dude," former Mobile District Attorney Chris Galanos recalls in the CNN series.

The detectives, Cecelia Perry says, began to inquire about whether her brother was involved in drugs, which the family knew wasn't true.

"Mobile had a fairly significant late-night street population. Talking about drug addicts," Williams says. "So we obtained permission to search Michael's room. And basically found nothing in his bedroom."

Adds Perry, "We had to just live and work through it because we knew that he was just an innocent person. He was innocent in this."

Michael's mother Beulah Mae Donald held an open-casket funeral, saying that she wanted the world to see the horror that had been inflicted on her son.

"I didn't even know what he looked like as my child," Beulah Mae Donald said. "The undertaker didn't want me to see where they'd made a footprint on his face with their boots."

Along with her attorney, Alabama state Sen. Michael Figures, Beulah Mae Donald and the local Black community protested and pushed the Mobile Police Department not to lose sight of justice for Michael Donald. Rev. Jesse Jackson came to Mobile, helping the case to gain national attention.

The three men initially charged in Donald's death were released after a grand jury determined the charges were based on perjured testimony.

It turned out the key witness, Johnny Ray Kelly, had his own legal troubles -- and the story he'd told police was a lie.

"It was really depressing -- you couldn't eat, you couldn't think of nothing else 'cause our life had just come to a standstill," Donald's sister Cecelia Perry says. She adds that despite the efforts of the Black community, "the Mobile Police Department, they sat on it and they would just call and say, 'we haven't forgotten you Ms. Donald, we still working on the case.' Oh, OK. Do something about it."

Then Sen. Michael Figures and his brother Thomas Figures, at the time an Assistant United States Attorney, steadily applied pressure on the Justice Department to examine the case.

"The head of the FBI office came up to me and laid a paper file on my desk and he said, 'Jim, take this case. The Justice Department, they will not allow us to close the case,'" Bodman says in the CNN series. "And I asked him, I said, 'Sir, what do you think I'm gonna do with it? I understand everybody in town's been interviewed three times.' He said, 'You take this case and you work it.' ... I get the case. They supposedly kept saying, 'It was a drug case gone bad. It was not a racial case. It was a drug case gone bad.' That was not the issue."

Bodman began to investigate. "Donald had been hung on a tree, the same block where this group of Klan lived and I'm thinking, 'Gee whiz, what better place to start?'" the now-former agent said. "So I started interviewing these people and I approached them with the idea they were not the subject of that investigation, other than the fact I want your information. I want to know what you know. And the more I ask questions, the more they talked."

Authorities continued to investigate several members of the Klavern 900, the area chapter of the United Klans of America, and called some to testify before a federal grand jury.

One of Donald's killers, James "Tiger" Knowles, confessed. He implicated Henry Hays, the other Klansman who helped him kill Donald that March night in 1981, and both men were arrested. Hays pleaded not guilty.

Hays' capital murder trial began, with Knowles testifying against him after pleading guilty to a federal charge of violating Michael Donald's civil rights.

"The agreement was (that), since Tiger had incriminated Henry Hays, Tiger would be allowed to plead guilty to a civil rights violation in the Federal system and was to have been sentenced to a life term, and then we would try Henry in state court for capital murder," former Mobile District Attorney Chris Galanos explains in the docuseries. And by trying Hays in the state of Alabama, the prosecution was able to seek the death penalty.

Knowles testified against Hays, going into detail about how -- and why -- Donald was killed. The same week of Donald's murder, Knowles said, there was a different criminal case that had the attention of Mobile Klansmen: The trial of a Black man named Josephus Anderson.

Anderson was accused of killing a White police officer in an earlier robbery. When the jury couldn't reach a verdict, the case ended in a mistrial. Knowles testified that he and Hays went "hunting" for a Black person for revenge.

"The Klan wanted the message to get back to the Black people of not just Alabama, but the whole United States, that we would not stand for a Black person killing a White police officer and getting away with it," Knowles testified. "Especially in Alabama. We'd gotten the rope, and we got the gun, and then I tied the hangman's noose in Henry's car. We were out on a hunt."

The jury found Hays guilty of capital murder and recommended life without parole.

An Alabama judge instead gave Henry Hays the death penalty.

With Hays sentenced to death and Knowles facing life in prison, the men who brutally assaulted and killed the 19-year-old were finally punished.

But the Klan, the organization that bred the hate behind Knowles' and Hays' crime, was still a threat. Beulah Mae Donald's lawyer, then Sen. Michael Figures, along with Morris Dees, the co-founder of the Southern Poverty Law Center, filed an over $10 million civil suit against the United Klans of America and others.

"My mother, she say, 'The worst has already been done,'" Cecelia Perry remembers in the CNN series. "'My child is gone. I want to make them pay for what they've done to my child.'"

After hearing Donald's case, an all-White jury awarded a $7 million judgment. The sum was so significant that it effectively bankrupted the United Klans of America, which was known as one of the largest and most violent KKK factions.

In an attempt to pay some of the damages owed, the United Klans of America turned over its headquarters in Tuscaloosa, Alabama, to Beulah Mae Donald. She sold the building and used the money to buy her first home.

Beulah Mae Donald died at the age of 67. Before her death, she was honored by Ms. Magazine as the publication's 1987 Woman of the Year.

"I wanted to know who all really killed my child,'' she said in response, according to The New York Times. ''I wasn't even thinking about the money. If I hadn't gotten a cent, it wouldn't have mattered. I wanted to know how and why they did it.''

Henry Hays was executed in Alabama. It was the first time since 1913 that a White person had been put to death for a crime committed against a Black person in the state.

Herndon Avenue, the street where Michael Donald's body was found, was renamed in his honor around 25 years after his death.