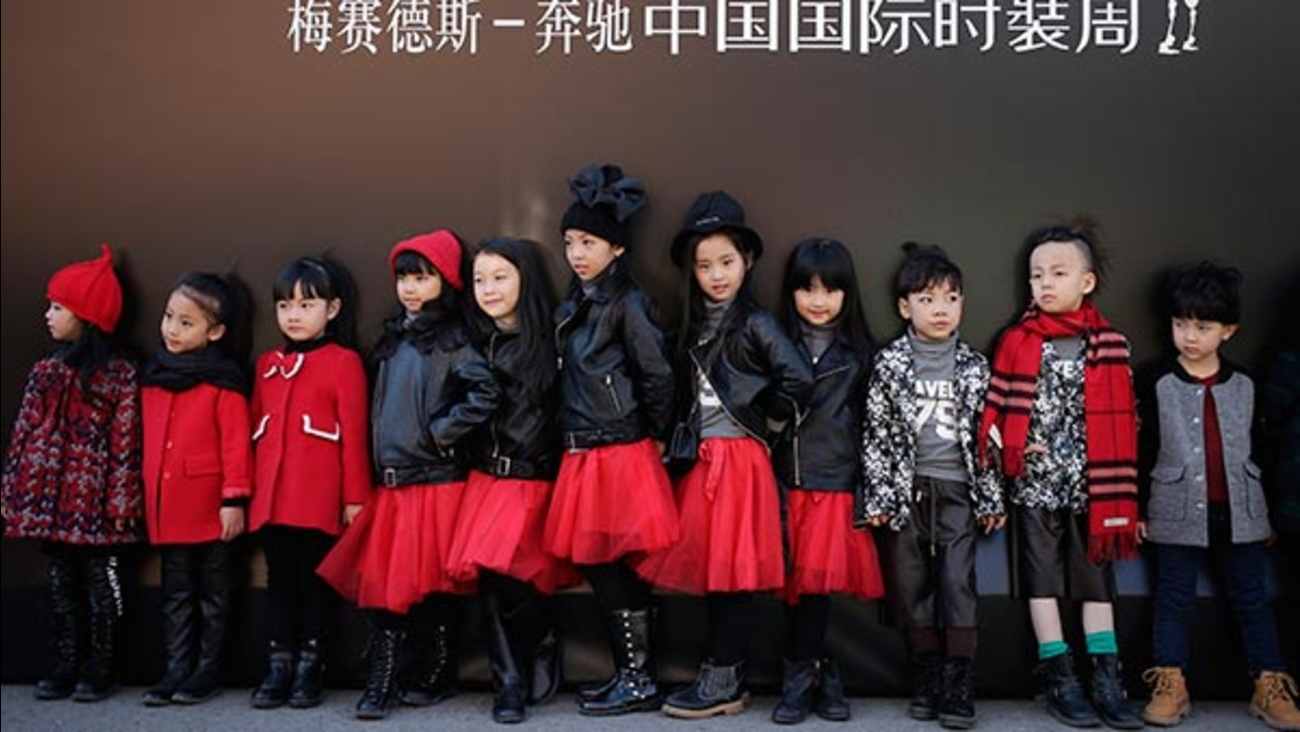 Models for the children's wear fashion show stand outside the venue during the China Fashion Week in Beijing, Thursday, Oct. 29, 2015. (AP Photo/Andy Wong)

BEIJING -- China's ruling Communist Party announced Thursday that the country will start allowing all families to have two children, abolishing an unpopular policy that limited many urban couples to only one child for more than three decades.

The decision is the most significant easing of family-planning policies that were long considered some of the party's most onerous intrusions into family life and had been gradually relaxed in recent years. The restrictions led to an imbalanced sex ratio because of a traditional preference for boys, and draconian enforcement that sometimes included forced abortions.

The news elated 36-year-old Su Weihu in Guangzhou, who said she now plans to get pregnant next year before she becomes too old, and that she is eager for her 8-year-old daughter to have a sibling.

"I have looked forward this for so many years - even had dreams about it! I cried every time when I woke up and realized it wasn't yet true. I thought it was so unfair," Su said. "I do not care if the second child is a boy or a girl, at my age, as long as he or she is healthy."

A statement from the party's Central Committee carried by the official Xinhua News Agency said the decision to allow all couples to have two children was "to improve the balanced development of population" and to deal with an aging population.

The move may not spur a huge baby boom in part because fertility rates are believed to be declining even without the policy's enforcement. Previous easings of the one-child policy have spurred fewer births than expected, and many people among China's younger generations see smaller family sizes as ideal.

Real estate agent Zhang Linghui reacted to the news in downtown Beijing by saying the policy change was a "sign of respect toward the people."

"You should be able to choose how many kids to have," she said.

The statement followed the panel's meeting this week to chart the country's economic and social development through 2020. In recent years, it has been unusual for such plenary sessions to result in major decisions. They generally focus on economic topics and there was no indication that this one would take action on the one-child policy.

China, which has the world's largest population at 1.4 billion people, introduced the one-child policy in 1979 as a temporary measure to curb a then-surging population and limit the demands for water and other resources. Soon after it was implemented, rural couples were allowed two children if their firstborn was a girl. Ethnic minorities are also allowed more than one child.

Chinese families with a strong preference for boys have sometimes resorted to aborting female fetuses, a practice which has upset the ratio of male to female babies. The imbalance makes it difficult for some men to find wives, and is believed to fuel the trafficking of women as brides.

Couples who broke the rules have been forced to pay a fee in proportion to their income. In some cases, rural families saw their livelihood in the form of their pigs and chickens taken away.

In November 2013, the party announced that it would allow couples to have two children if one of the parents is a single child, the first substantial easing of the policy in nearly three decades.

The decision announced Thursday removes all remaining restrictions limiting couples to only one child.

The government credits the one-child policy with preventing 400 million births and helping lift countless families out of poverty by easing the strain on the country's limited resources. But many demographers argue the birthrate would have fallen anyway as China's economy developed and education levels rose.

Moreover, the abrupt fall in the birthrate has pushed up the average age of the population and demographers foresee a looming crisis because the policy reduced the young labor pool that must support the large baby boom generation as it retires.

"It's better late than never," said Willy Lam, an expert on Chinese politics at the Chinese University of Hong Kong. "It might serve to address the current imbalance in the sense that if they do not boost the growth rate then very soon, within 20 years or less, the working population will be supporting four aged parents."