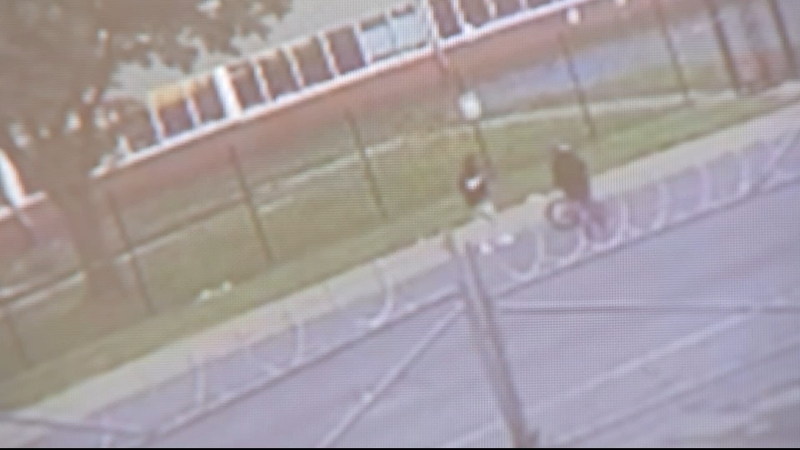 PHILADELPHIA (WPVI) -- Philadelphia police are looking for the gunman who shot and robbed a 33-year-old man Friday morning in Hunting Park.

It happened around 6:20 a.m in front of Antonia Pantoja Charter School, in the 4000 block of North American Street, where a staff member said she rushed outside to help the injured man.

"I found the person on the floor asking for help," the staff member said. "I talked to him and he said he got shot. I called 911 and he was bleeding a little bit."

Surveillance video showed how close the man got to the cyclist. The victim told police the man pointed a gun at him, and said he was going to rob him.

The suspect shot him in the thigh and took off on the stolen bike, northbound, leaving him helpless.

"Although this victim was shot in the leg, he's still really lucky cause it was a large caliber semi-automatic weapon," said Philadelphia Police Chief Inspector Scott Small.

Police did not recover a weapon but they found at least one shell casing.

Surveillance video showed the man struggling after the shooting, trying to hold himself up on the school's fence before dragging himself out to the street where he wait for assistance until police arrived.

The staff member said as a result of the shooting, children were not allowed inside the building Friday.

"All the police closed the street and stuff, and it wasn't safe for the kids coming in today," said the staff member.

With this incident adding to the violence that has gripped the city, the staff member said she's not shocked by this shooting, but thankful it happened before children arrived at school.

"I work at the school, you know you don't see that every day here, and it's a little scary," she said.

The man remains at Temple University Hospital in stable condition.

The shooter is still out on the loose. Police said he was last seen getting away on the stolen bike.