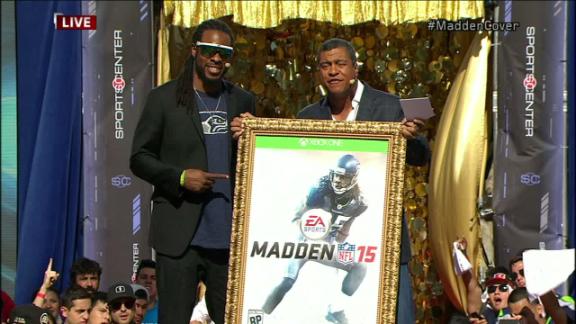 Sherman, who was voted as the cover athlete for the popular video game, said he has lobbied EA Sports to include the rest of Seattle's "Legion of Boom" secondary on the cover.

Sherman and Carolina Panthers quarterback Cam Newton were the finalists in the "Madden NFL 15" online voting, which concluded Friday on ESPN.com.

Widely regarded as the best cornerback in the NFL, the 26-year-old Sherman said Friday that he "would never be in the position" to be on the cover without the rest of Seattle's outstanding secondary, which features Pro Bowl safeties Earl Thomas and Kam Chancellor and emerging cornerback Byron Maxwell.

Sherman reiterated his appreciation for the cover vote Monday, referring to it as an honor.

"It was cool. It was really cool," Sherman said. "It was a great experience. It's always an honor being picked for 'Madden.' It's a fun deal."

Sherman Humbled To Win Madden Cover Vote
Seahawks cornerback Richard Sherman discusses winning the cover vote for the "Madden NFL 15" video game and what it will take for his team to win a second straight Super Bowl.