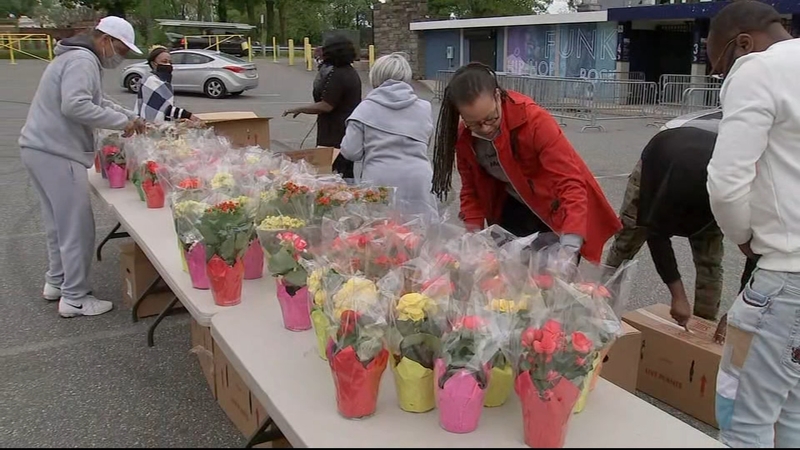 PHILADELPHIA (WPVI) -- An event Sunday morning at the Dell Music Center in Fairmount Park honored moms who have lost their children due to gun violence.

Mothers In Charge partnered with the Quaker State Funeral Director's Association to do a flower giveaway for the moms and also host a program featuring activists, singers, and other moms.

"The story goes away but the pain doesn't," said Lyn Johnson from Quaker State. "We just want to lighten the load and we know that it's been a year for them, but hopefully this small thing will go far."

One of those moms is Teverin Deal, whose son was shot and killed on February 28 at 40th Street and Lancaster Avenue in West Philadelphia. She said her son, 29-year-old Jayson Adams, was a new father and was starting a new career.

Philadelphia police say a quintuple shooting left two people dead on Sunday. A total of 20 people have been shot in the city this weekend.

"He wanted to get into real estate he was saying. He didn't get a chance to do it," she said. On this Mother's Day, Deal says she would give anything to be with her son.

"My message is you're a mother no matter what, and love is eternal," said Dr. Dorothy Johnson-Speight from Mother's In Charge.

The organization reached out to Deal after her son's death and invited her to the event.

Johnson-Speight spoke about the need for resources for families and the community. On the backdrop of the podium were the names of the city's 499 homicide victims in 2020, a 60 year high. 2021 is already pacing to top that, with 177 homicides as of May 9.