A Florida man who was seen inside the U.S. Capitol during the Jan. 6 insurrection sporting a Trump flag and T-shirt pleaded guilty on Wednesday to one count, marking the second guilty plea so far in the Capitol riot investigation.

Paul Allard Hodgkins, 38, pleaded guilty to one count of obstruction of an official proceeding, a felony that carries up to 20 years in prison and a maximum fine of $250,000.

As a result of a plea deal, he will face a substantially lower sentence and fine, which Judge Randolph Ross estimated could range between 15 and 21 months in prison, though that could be subject to change.

Hodgkins will also pay $2,000 in restitution, the judge said. 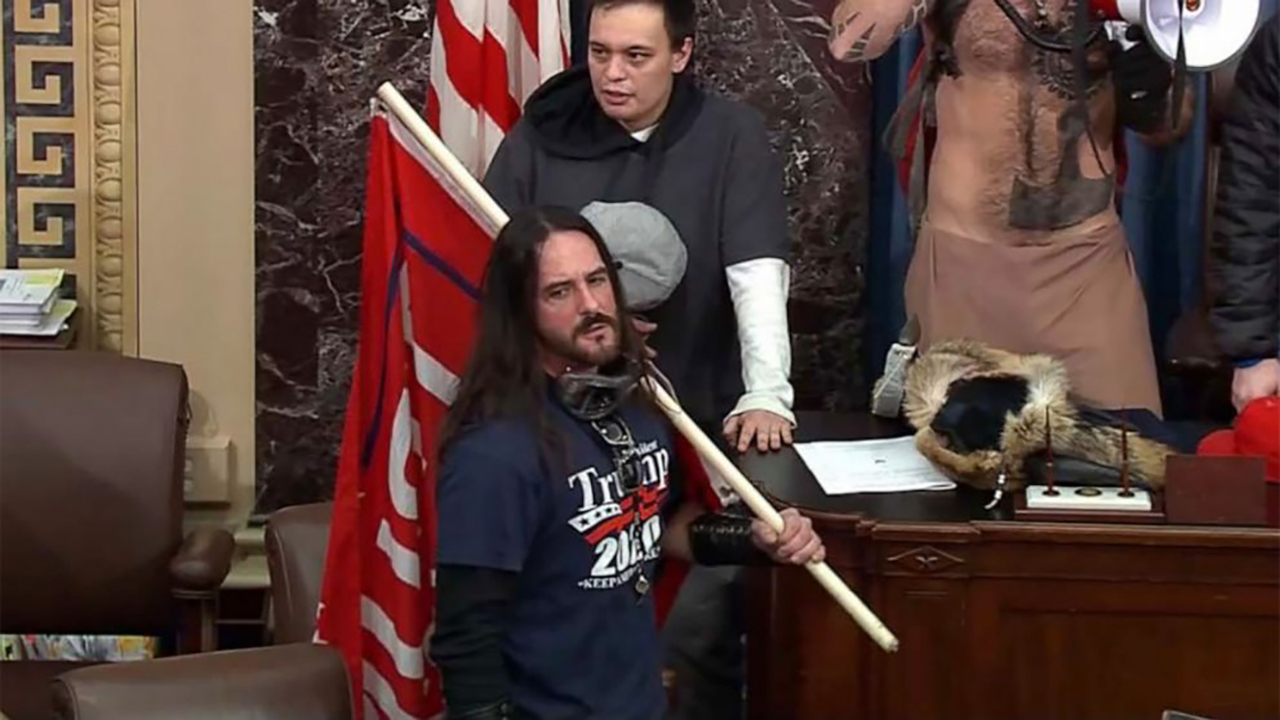 Paul Hodgkins is seen in an image from CCTV footage that was included in the charging documents by the Dept. of Justice, on Jan. 6, 2021, at the U.S. Capitol.

In April, a self-described member of the Oath Keepers militia group became the first Capitol rioter to plead guilty to the charges against him and enter into a plea agreement with the government. That agreement requires the man, Jon Schaffer, to fully cooperate with the government's investigation.

Since then, government prosecutors have indicated they are gearing up to start offering plea deals to dozens of other alleged rioters, marking a major new step in the investigation as it enters into its sixth month. On Tuesday, prosecutors said they had begun "informal plea negotiations" with several Oath Keepers charged in the government's conspiracy case, and hoped to offer formal deals within the next month or two.

Last month, another assistant U.S attorney told a judge she had put in a request for a plea offer in the case against Couy Griffin, a New Mexico elected official and founder of the group "Cowboys for Trump."

Hodgkins was arrested in February in Florida after a tipster first identified him to the FBI. He was originally charged with four additional felonies, which were dismissed as part of the plea deal, said Mona Sedky, the DOJ prosecutor in the case.

According to charging documents, Hodgkins was caught on surveillance footage inside the Senate chamber carrying a red "Trump 2020" flag. He was seen standing near the main desk where other individuals, including self-described "QAnon Shaman" Jacob Chansley, were "shouting, praying, and commanding the attention of others in the Senate Chamber," according to the document," to which Hodgkins "rais[ed] his flag in salute."

Hodgkins was also captured on video putting on protective eye goggles as well as latex gloves while standing near a desk with papers on it, according to the documents. During the court hearing, Hodgkins said the gloves were part of a first aid kit he carried, and that he had attempted to offer first aid to another individual, who ultimately refused care.

Hodgkins told investigators that he had traveled to Washington, D.C., from Florida, according to court documents, but he denied that he participated in the more violent conduct he witnessed happening around him, which he said included "breaking windows, individuals engaged in a knife fight, and other injured individuals," the document said.