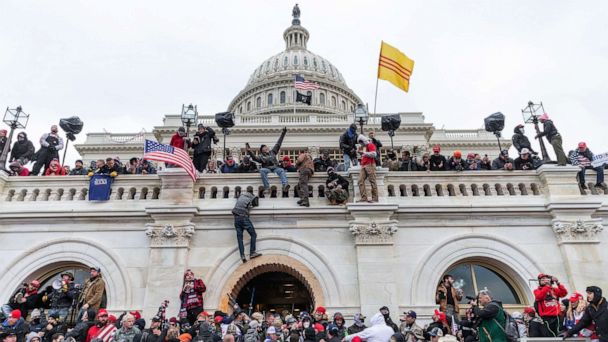 In early March, just weeks after the Jan. 6 insurrection at the U.S. Capitol, FBI investigators met with an individual who had tipped them off to the possible identity of one of the rioters that day. According to a court document, the tipster told investigators that the suspect, Elijah Yazdani, had said that he had traveled to the Capitol and had sent videos from inside the building.

But after both the suspect and the tipster deleted the videos from their phones, investigators were forced to take a different route. So according to court documents, they launched a facial recognition investigation in order to place Yazdani in the Capitol -- and they say it worked. He was arrested in May.


The facial recognition probe into Yazdani, who has not yet entered a plea and was released on bail shortly after his arrest, is just one of a number of tools investigators have utilized in the sweeping investigation into those who descended on the Capitol that day -- a probe that prosecutors say is likely the largest investigation ever undertaken by the Department of Justice. Approximately 465 suspects have been arrested in nearly all 50 states, according to the DOJ, and investigators are still seeking the identities of more than 250 individuals involved in assaults on officers or other violent acts.

To accomplish the task, investigators have increasingly utilized digital technology and social networks, according to court records analyzed by ABC News and experts in the field.

"What this case represents is that when the federal government is given the time, the money, and the manpower, you can do some incredible things in a fairly short period of time by combining technology with basic law enforcement work," said former FBI agent Brad Garrett, an ABC News contributor.

Investigators, for example, have built a list of the cellphone data of individuals who were authorized to be in the Capitol that day, and are using it to identify unauthorized cellphones and other devices belonging to the suspects who stormed the building, according to a court filing in the case of accused rioter Jeremy Groseclose of Virginia. Groseclose pleaded not guilty to the charges against him, which include civil disorder and obstruction of an official proceeding.

Investigators have also identified dozens of rioters via posts on social media accounts, including Facebook, Instagram, and Twitter, according to court records reviewed by ABC News. One accused rioter, Jonathan Mellis, was identified when he posted about "storming the castle" on his Facebook page, according to court documents.


According to Daniel Byman, a senior fellow at the Brookings Institute who studies counterterrorism, social media has increasingly played a "huge role" in law enforcement investigations, as more individuals "leave a digital trail we didn't leave 15 to 20 years ago," he said.

"We're now in a digital era where we all leave lots of information through our different devices, and most of the people involved in this [Capitol attack] are not used to being hunted," Byman said. "They make mistakes the way ordinary people would make mistakes -- they just aren't assuming someone is going to use the information to track them."

In April, Robert Chapman, of Carmen, New York, was using the dating app "Bumble" when he told his match that he had stormed the Capitol, according to court records.

"We are not a match," replied the woman, who then reported him to authorities.

Investigators confirmed Chapman's identity through Department of Motor Vehicle records and body-worn cameras from inside the Capitol, among other methods, court records said.

Chapman was arrested in April. He has not yet entered a plea.


The use of technology like this can be a "powerful investigative tool," said Byman.

Yet even with these high-tech tools, a number of arrests in the Capitol probe have come the old fashioned way.

Just a week after the Capitol attack, Daniel Warmus, who runs an auto shop in New York, was identified to investigators as a possible rioter after a tipster said they overheard him bragging about storming the Capitol while at the dentist, according to court records.

The tipster told investigators that they overheard Warmus talking about how a "police officer told [him] to leave the building, but [he] refused to leave," according to records. The tipster said they could also hear Warmus playing a video he had taken inside the Capitol.