A customer calls it an attempt to smear the Philadelphia Police Department.
WPVI
By Jaclyn Lee 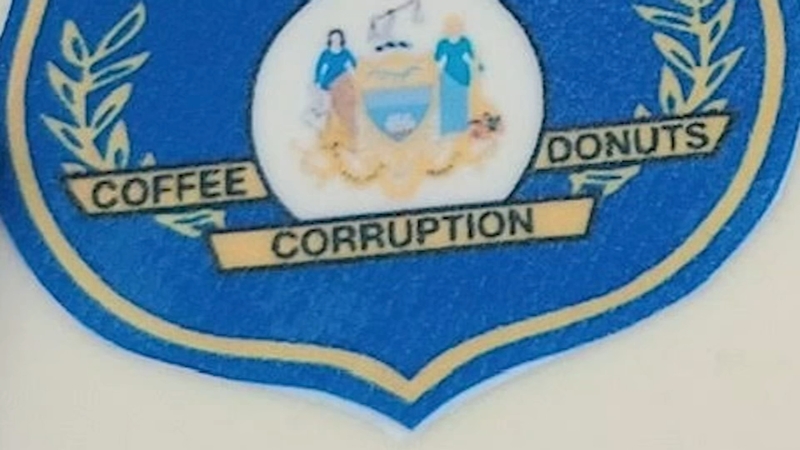 PHILADELPHIA (WPVI) -- A cake controversy shook both a Philadelphia woman and a Bryn Mawr bakery.

Customer Tina Jones, of the Frankford section, calls it an attempt to smear the Philadelphia Police Department.

The bakery, however, says this was an honest mistake.

Jones ordered a cake from The Bakery House in Bryn Mawr for her friend's 25th anniversary at the Philadelphia Police Department. She said she didn't notice what the fine print on the badge said until her friend was about to take the cake into his office to share with colleagues.

The official badge is emblazoned with the words "Honor, Integrity, Service," but the words on the cake read "Coffee, Corruption, Donuts."

A Philadelphia woman was stunned when she received this cake from The Bakery House in Bryn Mawr. She got the cake for her friend’s 25th anniversary @PhillyPolice. Bakery shop says they are mortified and it was an honest mistake and have nothing but respect for our officers @6abc pic.twitter.com/SRTlJxhCnH

"I wanted to cry because I'm like, 'I can't believe they did this,'" said Jones. "That's so humiliating to put on someone's cake who is serving 25 years and in a not-so-easy job."

But Sandy Stauffer, owner of The Bakery House, said this was an accident.

"My decorator is beyond upset, she's been crying all weekend, we all have been because it's mortifying," said Stauffer. "We are not the kind of business that would ever, ever disrespect (the police). Everyone should be respected, this was not done on purpose."

Stauffer showed 6abc about 100 orders that the decorator had to finish the day she made Jones' cake.

Stauffer explained the decorator thought the badge image provided by Jones was too blurry to look good on a cake, so the decorator pulled a more crisp, clear image of what appeared to be the police badge from online.

"We're tired, we're pushed because of the staffing situation," explained Stauffer. "She looked at the images, she saw the clearest one and she printed it."

Bakery was fully transparent and very remorseful. This is the stack of orders the decorator had to finish. The cake in question was toward the end. Decorator pulled a @PhillyPolice badge from clip art and failed to read the fine print at the bottom @6abc pic.twitter.com/nrcuJAKZIy

Jones said the bakery offered her a full refund but she declined.

Stauffer said she wanted to apologize to the Philadelphia Police Department and insists the decorator's actions were not malicious.

"This bakery house respects what they (police officers) do for their living, their job, they do a great job and I'm sorry ... please don't ever think otherwise that we don't respect the police."

Three popular Philadelphia bars will take turns being closed for a week this summer as staff members are given some paid time off.