Seeing fewer spotted lanternflies? Experts say they're on the move and spreading out

The swarms of carcasses littering skyscrapers and yards have yet to appear this summer.
WPVI
By Beccah Hendrickson 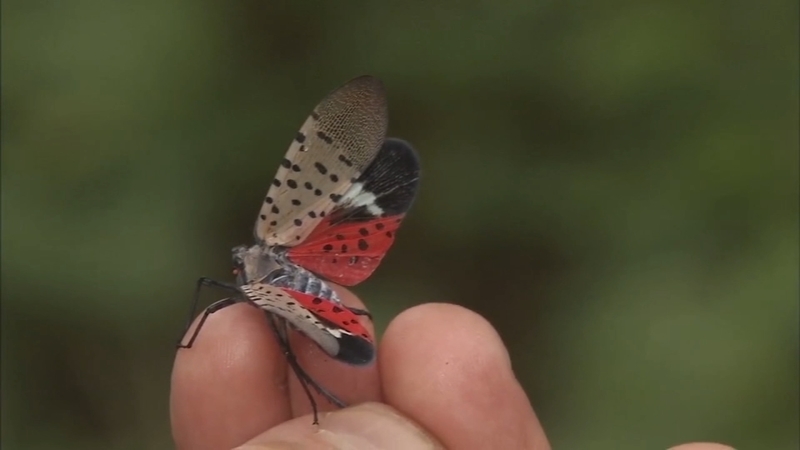 HUNTINGDON VALLEY, Pennsylvania (WPVI) -- Carefully placed on several trees, the more than 900 acres of conserved land at Pennypack Ecological Restoration Trust in Huntingdon Valley, Pa. is an experiment aimed at stopping an invader.

"They'll crawl up this mesh - it's really nice for them to grab - and then they'll get stuck up in here," explained Maria Paula Mugnani, the research and restoration coordinator at the trust.

She was showing a simple jar and mesh contraption that has trapped thousands of spotted lanternflies.

"Lanternflies are basically sucking the sap out of the tree leaves and that can affect the health and cause mortality in a lot of the trees," she said.

The bug has been a threat in Pennsylvania for seven years now, but the swarms of carcasses littering skyscrapers and yards have yet to appear this summer.

A Pennsylvania congresswoman is highlighting the threat that spotted lanternflies pose to the beer and wine industry.

Brian Walsh, the Berks County Horticultural Educator with the Penn State Extension, says the lanternflies are starting to spread out more, meaning the population doesn't appear as dense in some areas.

"We're not finished with the season yet so we're just gearing up on those adult flights," he said.

Walsh said what's important to stopping those flights from spreading is killing the bug on sight and also checking yourself and your vehicle before you travel, to make sure the bug isn't coming with you.

"It's expanding outward to Staten Island at this point. It was just confirmed as far away as Indiana," he says.

Conservationists say killing the bug is key to saving trees.

"We're really concerned about them cutting down those populations because those species provide a lot of ecological benefits," said Mugnani.

A Montgomery County, Pennsylvania family is combatting the increase spotted lanternfly problem with a trap made of rubber and netting from his 3D printer.