"We have to get the vaccination shot!" he yelled while walking down Carl Miller Boulevard.
WPVI
By TaRhonda Thomas 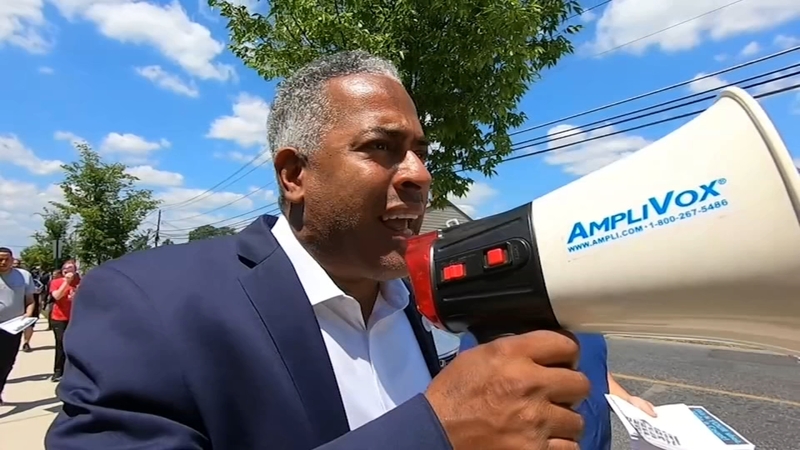 CAMDEN, New Jersey (WPVI) -- From the comfort of an air-conditioned studio on Tuesday, the mayor of Camden, New Jersey spoke about his plans to go door-to-door to encourage residents to get COVID-19 vaccinations.

Two days later, he traded the air conditioning for sweltering heat as he walked the streets of Camden, bullhorn in hand, to talk to residents who are hesitant to get vaccinated.

"I always say 'go where the community is,'" said Mayor Victor Carstarphen.

In his navy blue suit and crisp white shirt, he yelled into his bullhorn so that his message could be heard loud and clear.

"We have to get the vaccination shot!" he yelled while walking down Carl Miller Boulevard.

Mayor of #Camden in the streets literally with a bullhorn— encouraging people to get #Vaccinate. Only 50% of adults in the city are fully vaccinated. Underserved communities are even more at-risk. @Rutgers_Camden @camdencountynj @CamdenCountyPD @6abc pic.twitter.com/RZtSxi18wI

"I didn't expect that," said Camden resident Kenneth Russ shortly after the mayor passed by his rowhome. "Not in Camden, anyway."

The message of vaccination took on new urgency Thursday as Camden County announced that daily cases of COVID-19 nearly doubled in one week.

The daily number of cases had been at around 50 last week. Thursday, the county reached 98 new cases. Three weeks ago, the number of new cases per day was in the single digits.

RELATED: What's the safest mask to wear? Here's what a doctor says

That's the reason behind the mayor's door-to-door mission, which included Camden County officials and nursing students from Rutgers School of Nursing Camden.

"Today we're doing 2,000 houses," said Dr. Kevin Emmons, an associate dean at Rutgers School of Nursing Camden. He also grew up in the neighborhood that workers were canvassing. It is an under-served community made up of more minorities.

"Black and brown communities are at higher risk of contracting COVID-19 as well as dying from COVID-19," said Emmons.

The program bringing vaccines door-to-door is supported by a grant through the New Jersey Health Initiatives. Its mission is to identify ways to provide equitable access to vaccines.

According to information analyzed by the 6abc Data Team, of all the vaccines doses administered in Camden County, only 11% of the recipients are Black. Another 11% are Hispanic. Seven percent are Asian and 56% are white.

"The area that we're in right now are lower vaccination rates than whiter, richer parts of Camden County," said Emmons.

RELATED: Delta variant of COVID-19 now 93% of all sequenced cases in US

"Many people don't have the opportunities to seek healthcare or get vaccines," said Rutgers-Camden nursing student Guisela Aste-Molina right before she began going door-to-door with the group. "I think there's like language barriers so hopefully we can help with that too."

Aste-Molina, who is fluent in Spanish, talked to residents about opportunities to get vaccinated. Workers also made vaccines available to people who can't leave their homes. That includes the possibility of bringing the vaccine and administering it in a person's home.

"If someone wants a vaccine today, we'll make it happen," said Emmons.

As Melissa Baskerville drove her electric wheelchair down the street, she got a surprise conversation with Mayor Carstarphen. It's one that convinced her that it's time to get a COVID vaccine.

Others, like Kenneth Russ, were still doubtful even after talking with the nursing students who came to his home telling him about vaccines being offered at a clinic down the block.

"I don't know (about getting a vaccine)," he said as his son sat on the stoop in front of him.

"It's ok if they don't get the vaccine today," he said. "The more we have the conversation, we hope the more likely it is they'll get vaccinated."