The goal is get people out of Afghanistan immediately, says US Army captain from Malvern, Pa. 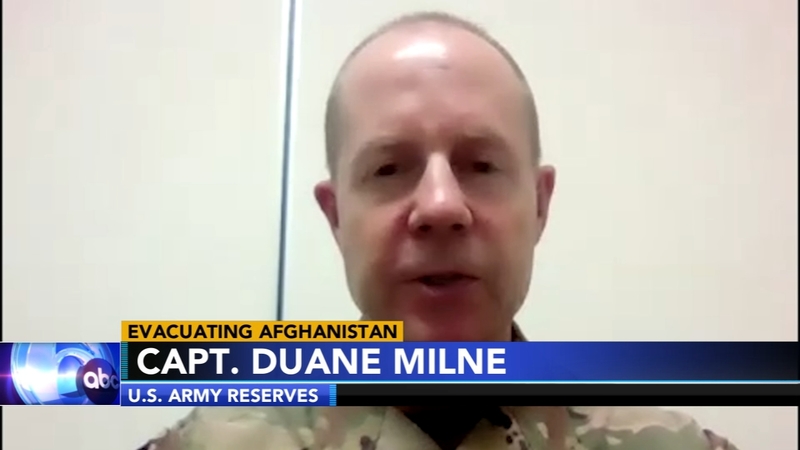 US Army captain: The goal is get people out of Afghanistan immediately

PHILADELPHIA (WPVI) -- The number one priority for the U.S. forces in and around Afghanistan is getting U.S. citizens and those who want out safely.

The West Chester University political science professor and former Pennsylvania state representative says he's currently working with forces in Qatar to process those who can make it out on a flight from Afghanistan.

But Milne adds that the task has become incredibly complex now that the Taliban has taken over.

"The full free flow of the journey out certainly has not begun yet," said Milne.

RLEATED: Biden's pledge to Americans in Kabul: 'We will get you home'
EMBED More News Videos

The hardest part Milne says is they're working around the clock knowing Afghan nationals who aided the United States during the last 20 years are likely in harm's way.

He says the Taliban has said they'd honor agreements, and no retribution would be sought after those people.

But those who have made it out say different.

"I know the individuals. I've had interactions with them here, and they are very fearful. They're not fully trusting they will remain safe," said Milne.

There is a steady flow of people of both American citizens and Afghani nationals coming into Qatar currently. So flights are being made.

But Milne adds the longer the situation takes, the more complicated it becomes with the Taliban.

"The United States has an obligation, a moral obligation, to uphold its commitments that it did make over the years to those that did support us," said Milne.

He also adds almost every person who gets to Qatar, the first thing they do is ask to charge their cell phone.

They're anxious to get in touch with family and worried about still being stuck in Afghanistan.