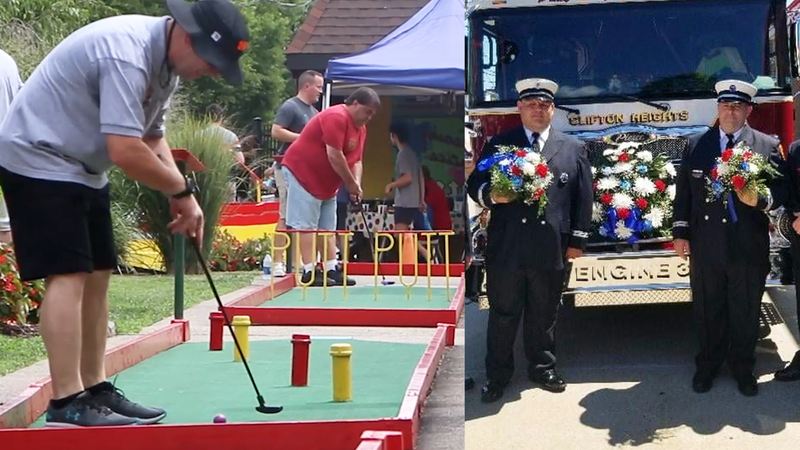 CLIFTON HEIGHTS, Pennsylvania (WPVI) -- "This is the only family I could ever ask for," said Andrew Murphy, a volunteer firefighter with the Clifton Heights Fire Company. "Every day I hang out with these guys and it's the best feeling ever."

Murphy, who has been volunteering for two years, says that all ages come together in the fire department to form an unbreakable camaraderie. Sadly, they lost one of their own on Saturday, July 24, 2021.

Three firefighters and a state trooper were struck by a drunk driver on that day. Captain Thomas Royds is said to have pushed the others out of the way, paying the ultimate sacrifice before losing his life.

"He was a hero all the way up to the end," said Kevin Cosentino, who is also a captain at Clifton Heights Fire Company. "I can only hope that I can live up to what Tommy has done."

The sacrifices made by first responders are in fact what inspired Putt-Putt Fun Center to host a miniature golf tournament this afternoon. Many firefighters from Clifton Heights attended the event, which raised money to benefit Thomas Royds' family.

"They're the ones that run towards danger, where we run away from it most of the time," said Robert Kokodirk, the owner of Putt-Putt Fun Center.

Kokordik has been visiting the Delaware County destination since he was a child. A friend of his once joked that he would buy the place one day. Many years later, he did.

"I have such fond memories of this place. I learned a lot from playing putt-putt, I learned a lot about sportsmanship, patience and tolerance," he said. "For our 50th anniversary, we thought we would do it for a good cause."

Free food, fun music, and friendly competition were the result of their efforts to recognize local first responders in the Delco community.

Sam Ozer was struck and killed while riding his bicycle last year. Now, his school is building a bicycle repair shop and education program in his name.