Turning hurt into healing: How event helps women in Philadelphia work through trauma

"We're on a trajectory to surpass 600 homicides here in the city of Philadelphia," said Councilmember Kenyatta Johnson.
WPVI
By TaRhonda Thomas 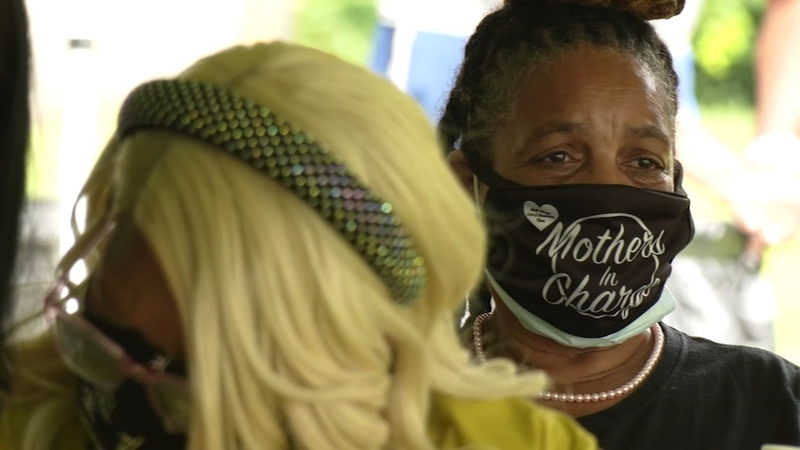 PHILADELPHIA (WPVI) -- As she sat in her chair under a tent of people in front of the historic Hatfield House in Philadelphia's Strawberry Mansion section, one mother wiped away tears. She did so while being brutally honest about what gun violence in the city of has put her through.

"I have PTSD from when our son got killed," she said as the group of women looked on, one putting her hand on the mother's shoulder as a sign of support.

The event that allowed her to speak so openly was created by Mothers in Charge, a Philadelphia-based nonprofit that supports mothers of gun violence victims and women who have been incarcerated.

Dr. Dorothy Johnson-Speight founded the organization after she lost her son to gun violence.

"I wanted to have an opportunity to have a conversation to let them know that they can triumph over the trauma," she said.

Those speakers included Fox Richardson, whose efforts involving the criminal justice system are highlighted in the critically-acclaimed Amazon documentary "Time."

RELATED: Building It Better Together | Combating Gun Violence in Philadelphia

Richardson and her husband were both incarcerated after committing a bank robbery. Her husband served more than two decades during which she worked to get him freed. The duo, known as FoxandRob, now travels the country speaking to others about healing trauma.

"We've just got to recognize it, own it, and then we can begin to heal from it. And once we heal ourselves, we can heal our children and move on to heal our entire community," said Fox Richardson.

It's a difficult mission in Philadelphia, where gun violence has become an epidemic.

"We're on a trajectory to surpass 600 homicides here in the city of Philadelphia. More than 5,000 shootings," said Philadelphia City Councilmember Kenyatta Johnson.

Johnson adds that the city will soon open a victim's advocacy office to support people such as the women who attended Thursday's event by Mothers in Charge. Johnson-Speight hopes it's the beginning of a healing process.