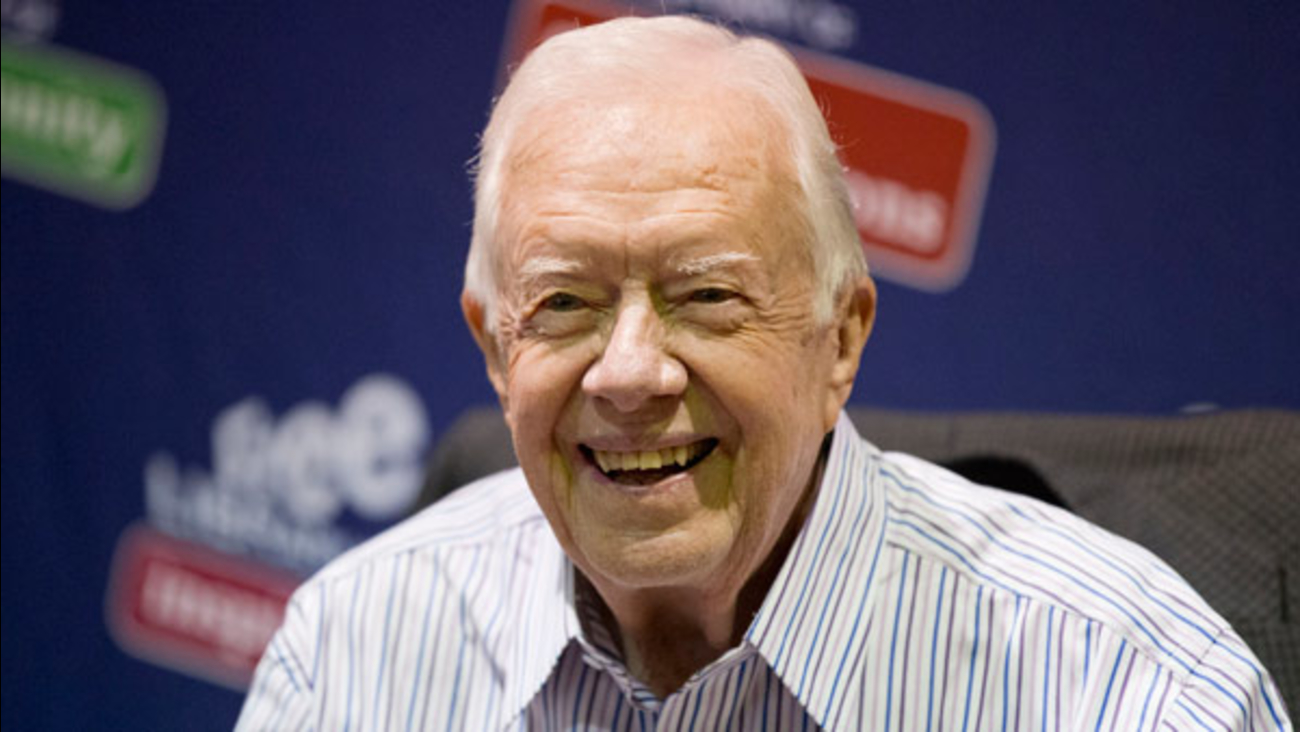 FILE - In this July 10, 2015, file photo, former President Jimmy Carter poses for photographs at an event for his new book at the Free Library in Philadelphia. (AP Photo/Matt Rourke, File)

ATLANTA -- Jimmy Carter said Sunday that his most recent brain scan showed no signs of cancer, more than three months after he began treatment for four melanoma tumors.

"My most recent MRI brain scan did not reveal any signs of the original cancer spots nor any new ones," Carter said in a statement.

The two-sentence statement followed reports that he had shared the good news with a Sunday school class at Maranatha Baptist Church in Carter's hometown of Plains, Georgia.

"I went to the doctors this week for the second time," Carter said in a video posted on Twitter by NBC News. "The first time I went for an MRI of my brain, the four places were still there but they were responding to the treatment. And when I went this week, they didn't find any cancer at all. So I have good news."

Carter smiled slightly as people in the congregation responded with applause.

"So a lot of people prayed for me, and I appreciate that," Carter said.

Carter's statement said he will continue to receive regular doses of Keytruda, a recently approved auto-immune drug to help his body seek out any cancer cells appearing in his body.

Carter, 91, announced in August that he had been diagnosed with melanoma that spread to his brain. Doctors removed a portion of his liver and found four small tumors on his brain. He received a round of radiation targeted at those tumors and doses of Keytruda every three weeks.

Carter's grandson, Jason Carter, told The Associated Press earlier Sunday in a text message that his grandfather on Friday "told me that the doctors couldn't find any cancer in his most recent scan."

Jill Stuckey, a Maranatha Baptist Church member, said in a phone interview that after Carter's comments she went into the church's back hallways to spread the word to members.

"Our prayers have been answered," Stuckey, also a close friend of the Carters, said. "I can't think of a better Christmas present."

It's not clear what other scans Carter's medical team at Emory University's Winship Cancer Institute have performed. A spokesman didn't immediately return messages on Sunday and Carter only mentioned a brain scan.

Dr. Len Lichtenfeld, deputy chief medical officer for the American Cancer Society, said doctors evaluating melanoma patients will use scans of other body parts beyond where the disease has been found to ensure it has not spread.

"For today, the news cannot be better," Lichtenfeld said. "Circumstances may change over time or he may be in a situation where it does not recur for many years or at all."

He expects Carter's doctors will continue "close surveillance" for any new cancer growth or recurrence in his brain and continue doses of the immunotherapy drug as long as Carter handles it well.

Carter has remained active during treatment, volunteering on a building project with Habitat for Humanity and continuing to work at The Carter Center, the human rights organization he founded after leaving the White House.

"I've reacted well to the treatments," Carter told The Associated Press in November. "I haven't been uncomfortable or ill after the treatments were over. So that part of it has been a relief to me and I think to the doctors. But the final result of how well the treatments are combatting or controlling the cancer, we don't know yet."