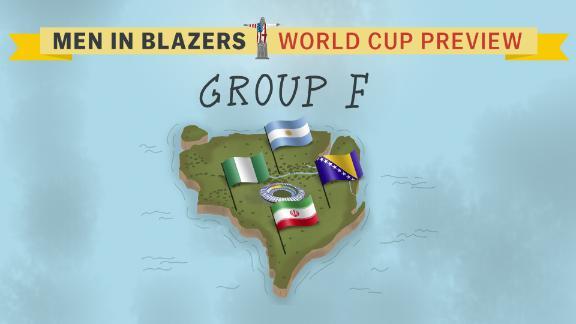 There is plenty of uncertainly surrounding many of the eight groups at Brazil 2014, but it is hard to look beyond Argentina as probable winners of Group F.

The prospect of lifting the World Cup on the soil of their long-standing soccer rivals Brazil will inspire Lionel Messi and his team of stars to put in that extra ounce of effort to emerge triumphant this summer. The comfort they can expect to enjoy in this opening group can only help their cause.

Bosnia may be the biggest threat to their hopes after a series of free-scoring performances in qualifying confirmed their attacking potential, but this group is Argentina's to lose and it may even be that their coach Alejandro Sabella gets a chance to fine-tune his team in their first three games for the more threatening battles that will lie ahead.

As Argentina are the runaway favourites in this group, the focus may turn to the battle for second spot and that could be decided by the showdown between Bosnia and Nigeria in Cuiaba on June 21.

Bosnia's joy at qualifying for their first World Cup finals served to boost the morale of a nation that has endured political troubles for much of its recent history and the pride Safet Susic's side will play with in Brazil this summer could take them a long way.

Manchester City's Edin Dzeko may be their shining star, but look out for Roma's Miralem Pjanic to impress in his role as creator in chief, with Chelsea's John Obi Mikel among those who will try to halt Bosnia's ambition in a game that will see a contrast in styles.

Nigeria lack star talent this time around, but they are athletic and youthful and will test Bosnia's big-game temperament.

Lionel Messi (Argentina): The world's greatest footballer for much of the past decade has never quite clicked into top gear at a World Cup. The opening group of fixtures presented to Argentina offer the Barcelona star the chance to explode into life from the off this time.

Edin Dzeko (Bosnia-Herzegovina): His 10 goals in Bosnia's 10 qualifiers for this World Cup confirmed his importance to this team. Few players have the strength, control and finishing power of Dzeko when he is at his best. He also scores vital goals.

Reza Ghoochannejhad (Iran): Goals may be a rare commodity for Iran at this World Cup, but they will look to this striker plying his trade with English second-tier club Chartlon to deliver the goods. He has an impressive scoring record at international level.

John Obi Mikel (Nigeria): Rugged, determined and an unsung hero in any team he plays in, Mikel has come under fire from some Chelsea fans in recent years for his lack of attacking intent.

Argentina's opening match against Bosnia may be their toughest test of the opening phase of Brazil 2014 and if they come through with flying colours, Messi and his pals are likely to emerge as strong contenders to lift the World Cup.

Alternatively, a struggle against a Bosnia side that will be desperate to shine on their country's debut in this competition could bust the inflated bubble of expectation surrounding the Argentina team.

In essence, Sabella's Argentine team is set up to hit teams on the break with pace and trickery, but they will need to be on the front foot for their first three games and it will be fascinating to see how they deal with that change of mentality.

Nigeria could be a team to watch in this group as there is a good chance they will get three points on the board early by beating Iran and they will be bolstered by that fast start when they play Bosnia in their second fixture.

It is the third time in four World Cups that Argentina and Nigeria have been grouped together. Nigeria finished last both previous times, while Argentina won the group in 2010 and finished third in 2002.