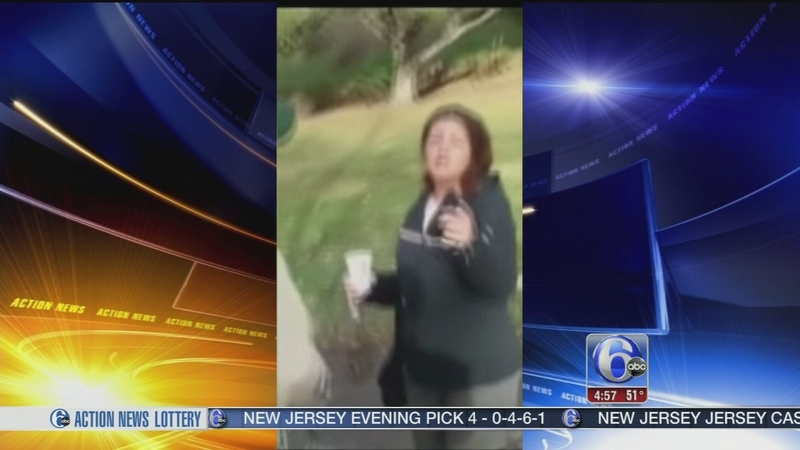 CASTRO VALLEY, Calif. -- A group of Muslim men say they were attacked in a park located outside San Francisco, and the confrontation was caught on camera.

The man holding the cellphone and recording that incident tells our sister station ABC7 News the woman in the video should be charged and fired from her state job. He says the woman asked his friends if they believed in Jesus. When they answered that they respect Jesus, they say she became extremely disrespectful.

The woman yelling at a group of Muslim men about hate could now face a hate crime charge herself.

"I was shocked," said Rasheed Albeshari, who took the video. "I wasn't expecting that, specifically in the Bay Area."

Albeshari started recording in Lake Chabot Park on Sunday when he says the woman in the video got agitated after seeing his friends praying. A park ranger tried to intervene and then it got physical.

In the video you hear a man say, "This lady was talking about my God, she was saying he was..."

At that point, the woman came up and apparently hit the man, jostling the camera as he yelled, "Do not touch me!"

The man behind the camera says he got coffee in his face and got hit by the woman's umbrella.

"We are now forwarding the report to the district attorney's office to decide whether to go proceed with misdemeanor battery or a hate crime," said Carolyn Jones with the East Bay Regional Park District.

Denise Slader, who works for the California Department of Corrections, is the woman in the video. She tells police that she is the real victim because she was videotaped against her will.

The Department of Corrections is now conducting an internal investigation. In a statement, it said discrimination of any kind will not be tolerated.

When ABC7 News tried to get her side of the story, she didn't answer the door. Sladers' neighbors did speak to ABC7 News.

"I know she's a born again Christian, very religious. Has shown no malice towards anybody. I am surprised," one neighbor said.

"She acts like a lot of people. She just got wound up in the moment. Fortunately, nobody really got hurt," said Slader's neighbor Tom Wallace.

No apology from Slader tonight, but the man recording the video says he's received many condolences from others in the community.

Albeshari explains he's been told, "This is a tiny minority of Americans, that's not who we are."

He adds, "I know without people telling me that. I know this. But it feels so good hearing it in that moment."

As for the woman in the video, she faces two investigations now -- one from the district attorney and another from her employer.

Albeshari tells ABC7 News he's very appreciative of people coming up to him and apologizing for this woman's actions.