Johnny Manziel vents over interception, smacks his head with tablet 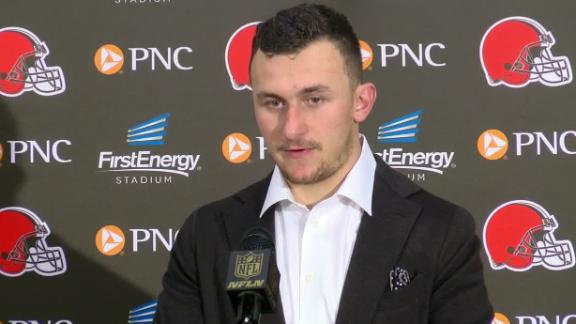 CLEVELAND -- Johnny Manziel was angry with himself.

That's why the quarterback smacked a Surface tablet into his forehead five times late in the first half of Sunday's 24-10 victory over San Francisco on Sunday.

"Beat me to it then," Cleveland Browns coach Mike Pettine quipped after hearing about Manziel's reaction to throwing an interception.

Manziel haphazardly threw across the field in the final two minutes of the half, and what he saw of the play on the tablet reinforced how bad his decision was.

"I was more upset getting to the sideline, obviously about the pick, throwing it back across my body," Manziel said after completing 21-of-31 for 270 yards with one touchdown and the one interception. "I know better than that. Then I looked at the Surface."

There he saw that the 49ers had left tight end Gary Barnidge wide open down the seam for what would have been a big play. Manziel simply missed him.

"To get a touchdown there before the half on a busted coverage, you have to make them pay on things like that," Manziel said. "That doesn't happen all the time in the NFL. I was more upset knowing that we are going to be watching that on film [Monday]."

Manziel admitted to overreacting, but he said he quickly calmed down. He also showed his growth as a quarterback by recognizing he can't throw across his body and across the field the way he did.

"This isn't freaking A&M," he said of his college career at Texas A&M. "Just throw it away."

The forehead abuse by tablet was all over Twitter and on most highlight shows. But it was one bad play in an otherwise good game by Manziel, as the Browns won for the first time since Oct. 11.

Pettine shrugged it all off.

"When it is toward himself over frustration of doing something boneheaded, I have no problem with it," Pettine said.

As for the Surface?

"The Surface did survive, I believe," Manziel said.

Manziel made headlines earlier Sunday by signing a fan's $100 bill before the game.