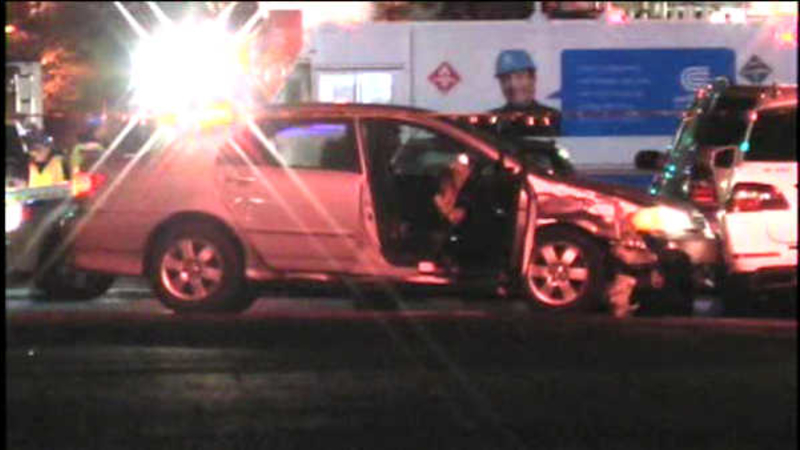 LONG BRANCH, N.J. -- An off-duty officer jumped into action to rescue a driver during a violent road rage attack in New Jersey.

The quick-thinking action of Long Branch Police Sgt. Frank Passantino saved driver Ryan Hennessey from what could have been a brutal beating at the hands of a bat-wielding road rager.

Last Friday Hennessey encountered a man in a pickup truck at Route 18 and Route 138 in Wall Township.

"I saw the truck behind me. I thought there was plenty of room. That's when he thought I was too close. And that's when he started with the high beams and riding on my bumper," said Hennessey.

The driver, Hennessey says, cut him off, throwing a handful of change at his car. Moving down on Route 138, Hennessey tried to get away.

"As I passed him he was waving the bat in the car at me," said Hennessey.

But then Hennessey got stuck in traffic at a red light at New Bedford Road.

"When I got out of my car and looked behind me this guy was coming full speed with a bat," he said.

Sgt. Passantino was also sitting at the light several cars behind Hennessey and a couple in front of the bat-wielding suspect.

"He kind of went running past me that way. I was like, really?," said Sgt. Passantino. "I drew my weapon and said, 'I'm a police officer, drop the bat'. And he stopped and looked at me and he was really angry."

"Do you really think at that point this guy is going to drop the bat? Did you even consider what he might do?," we asked. "Well, when he didn't drop it immediately I was like oh, no, this is going to go bad," said Sgt. Passantino.

He ordered the suspect again. "At which time he realized he was looking down the barrel of a gun," he said.

Watching this unfold Hennessey remembers thinking: "There is a guy with a bat. And a guy with a gun. I'm laying down. "

Hennessey is now being able to thank Sgt. Passantino for his quick action.

"I'm actually glad that I was there," said Sgt. Passantino. "You and me both," said Hennessey.