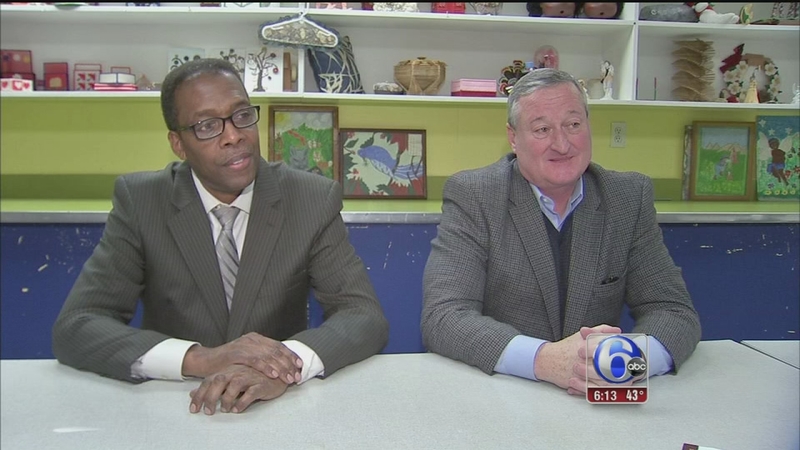 They tell Action News they will avoid the bitter disputes that flared up during the two terms of outgoing Mayor Michael Nutter.

"The thing is the team approach is the one that works," said Kenney.

"We have a good personal relationship. I think that the benefits associated with that will work out for the citizens," said Clarke.

The two seldom, if ever, clashed over policy during their many terms on the City Council, and both are darlings of organized labor.

Some in the business community look at Kenney, the son of a retired fireman, with a jaundiced eye, fearing he may lean heavily toward blue-collar workers and working-class neighborhoods, and not value their perpetual concerns like high taxes.

"The attitude toward our municipal workforce has not been a good one because, first of all, they're citizens of the city and they pay taxes," said Kenney. "Second of all, they're people who make the city work. You try walking past the trash truck six months a year."

"The personalities are clearly different between Jim Kenney and Michael Nutter," said Clarke. "I think the personality issue will not be a big one. It's clear that we will be able to work together."

Kenney says he is waging a national search for a new fire commissioner, citing too many divisions within the department.

He tells Action News more than 80 percent of his cabinet and key aides are in place including Police Commissioner-to-be Richard Ross.

Kenney is aware the police-black community tensions run high in the city and across the nation.

"God forbid something bad is gonna happen. At some point in time we're gonna lose an officer, we're gonna lose a citizen," said Kenney. "There's gonna be things that happen that we can't control, but how we approach that, how we respond to that is what matters."

One week from today, Kenney will be sworn-in as mayor. He'll be assuming the power and burdens of the chief executive, which are far different from the role of lawmaker.