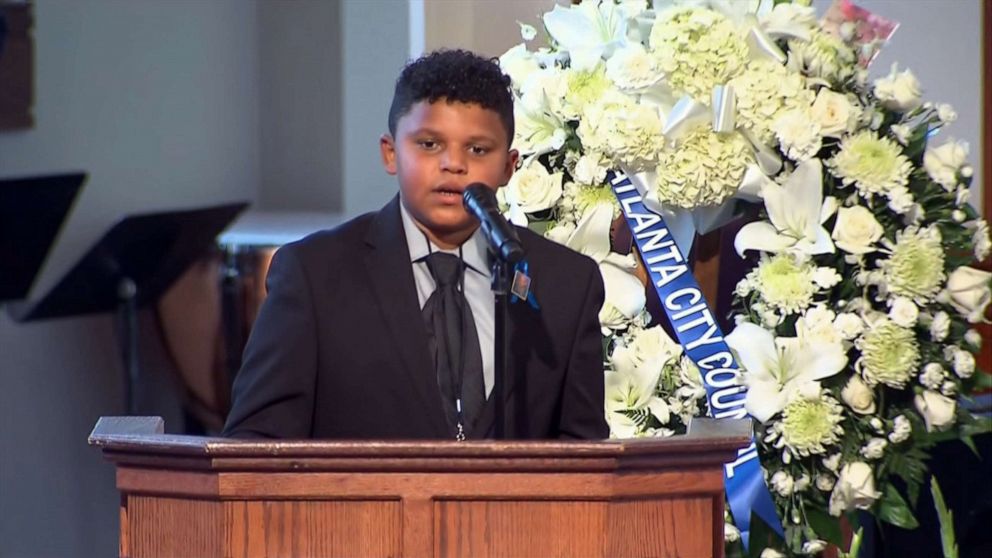 Ebenezer Baptist Church in Atlanta echoed with applause for a young boy from Tennessee who admired Rep. John Lewis and was tapped by the late civil rights icon's family to speak at his funeral on Thursday.

12-year-old Tybre Faw took the stage during the service to celebrate Lewis' life by reciting one of the lawmaker's favorite poems, "Invictus," by William Ernest Henley.

"It matters not how straight the gate, How charged with punishments the scroll, I am the master of my fate, I am the captain of my soul," Faw read at the service.

Faw first met Lewis in 2018 when he traveled 400 miles with his family to attend a march in Selma, Alabama, to commemorate the 53rd anniversary of "Bloody Sunday."

Lewis noticed Faw's sign at the time which read, "Thank you, Rep. John Lewis. You have shown me how to have courage."

Since their first meeting two years ago when Lewis introduced himself to Faw, the pair became friends and stayed in touch.

"John Lewis was my hero, my friend, let's honor him by getting in good trouble," Faw said to the congregation filled with Lewis' friends and family.

As he walked away, Faw was overcome with emotion from the response of the crowd's applause and support.

In a letter from Lewis published Thursday by the New York Times, his call to fight for change was renewed.

"While my time here has now come to an end, I want you to know that in the last days and hours of my life you inspired me. You filled me with hope about the next chapter of the great American story when you used your power to make a difference in our society," Lewis wrote before his death. "Millions of people motivated simply by human compassion laid down the burdens of division. Around the country and the world you set aside race, class, age, language and nationality to demand respect for human dignity."