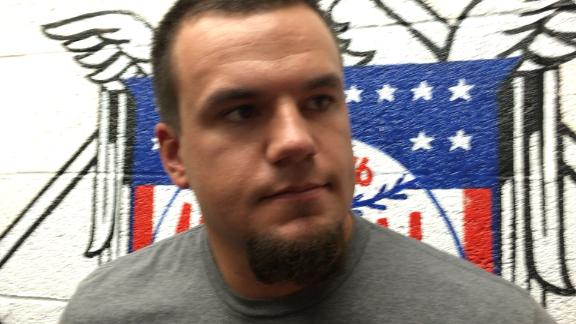 PHOENIX, Ariz. -- Injured Chicago Cubs outfielder/catcher Kyle Schwarber vowed to return "bigger, faster and stronger" after he toretwo ligaments in his left knee in an outfield collision with teammate Dexter Fowler on Thursday.

"I was disappointed for about 30 minutes," Schwarber said of receiving the news that his season was over. "I got to talk to some of the guys. They definitely brought my spirits up.

"It's not the way you plan your season going -- playing two games, then you're out for the season -- but now I have to be there for them in a different way."

Schwarber faces a long rehabilitation process after he and Fowler collided while going forJean Segura's fly ball in the second inning of the Cubs' game against the Arizona Diamondbacks. Schwarber was carted off the field. Fowler suffered a hip injury, but he hasn't missed any playing time.

"It felt like getting into a car crash," Fowler said Saturday in his first public comments since the collision. "That's a big man over there, but you respect the hell out of him. He's like my little brother over there."

Schwarber is intent on remaining a part of the team as he rehabs his knee and ankle, which he sprained in the collision as well. Knowing his teammates want him in the clubhouse has softened the blow of missing all but three games of this season.

"Once that night came after the injury, I knew something significant probably happened because my knee was very swollen," Schwarber recalled. "I have a pretty good feel for my own body, and I knew something was probably wrong. I didn't see two tears coming. You have to face it head on. I'm not going to back down from it."

Schwarber will return to Chicago with his teammates on Sunday night but isn't sure he can make it to Wrigley Field for the home opener on Monday. He will visit with team doctors, who will determine when surgery will take place. On Friday, Cubs president Theo Epstein speculated that the operation would occur in one to three weeks, depending on the swelling around Schwarber's knee.

"You look back on it, [and] you can't do anything different," Schwarber said. "It was just a freak accident ... I know it's going to be a long road. There's going to be ups and down. I have to keep a good attitude for this."

The Cubs are confident their second-year star will do all he can to return, though there's no timetable -- at least not until he has the surgery.

"My goal is to be healthy and help the team win," Schwarber said. "Wherever that timetable puts me is where I'll be. I'm going to push myself as far as I can."

Schwarber heard from several people around the league, including Cincinnati Reds players Jay Bruce and Michael Lorenzen,who both suffered knee injuries recently. Bruce had a bad one in 2014 but played 157 games last year. Schwarber is committed to doing the same.

"I look at it as I have a whole year to prepare for a new season," he said. "I think I'm going to come back better."