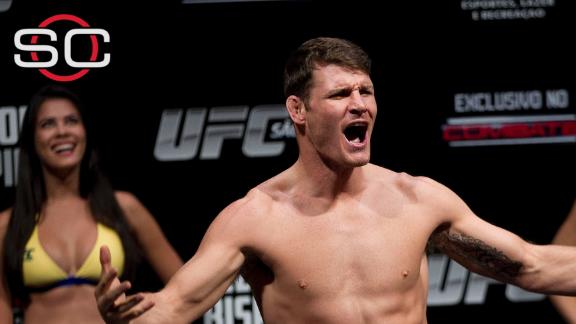 Middleweight champion Luke Rockhold has found a last-minute opponent for his first title defense at UFC 199 and it's a familiar name -- Michael Bisping.

UFC president Dana White announced the new main event Wednesday on SportsCenter, headlining the June 4 card at The Forum in Inglewood, California. Former champion Chris Weidman pulled out of the fight on Tuesday and announced in a Facebook post he has a "large extrusion herniation" in his neck that will require surgery.

"It's always devastating when you are getting ready for a guy for that long and two weeks before the event he has to pull out," White said. "Obviously [Rockhold] is bummed out, but he's very excited to fight Bisping. They don't like each other. As soon as the fight fell out with Weidman yesterday, those two started going back and forth on social media."

Rockhold (15-2), who captured the title from Weidman via fourth-round TKO in December, has history with Bisping (28-7) as the two middleweights headlined a November 2014 card in Australia. Rockhold, 31, dominated the fight and won by second-round submission.

White admitted that the fighter who was first in line to replace Weidman wasRonaldo "Jacare" Souza, who looked spectacular in stopping Vitor Belfort lastSaturday at UFC 198 in his native Brazil. But the UFC president reported that Souza suffered a torn meniscus during the fight.

"Who makes the most sense is obviously Jacare Souza, who just fought Saturday in a dominating performance," White said. "But he's going to need surgery and is going to be out for a while. The next guy after Vitor Belfort and behind him in line is Michael Bisping."

England's Bisping, 37, who made his UFC debut in 2006, finally secured an elusive title after 25 appearances and 18 victories in the Octagon. Bisping has won three straight since his loss to Rockhold, including a disputed five-round decision against Anderson Silva in February.

Rockhold, a former Strikeforce champion, has won five straight since losing his UFC debut to Vitor Belfort in 2013. Despite a trash-talk-fueled buildup to their expected rematch, Rockhold tweeted his support to Weidman late Tuesday.

White referred to Weidman's setback as a "bad injury" but said he hopes to see the fighter make a quick recovery.

"It's always scary when you are doing surgery on your neck and your back," White said. "Hopefully the surgery is a success so we can see him come back shortly."

Both Rockhold and Weidman fought through injuries during their first meeting at UFC 194. Rockhold overcame a staph infection while Weidman later admitted he entered the fight with a broken right foot.