Patriots' Tom Brady slices thumb in pregame prep, will sit out vs. Bears 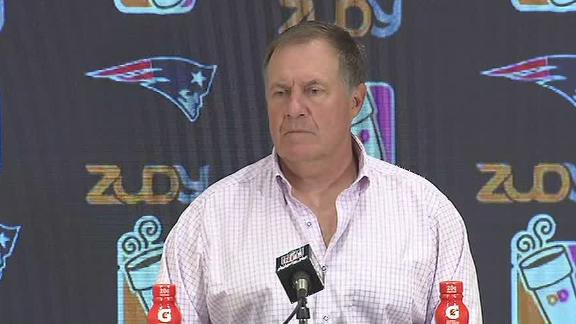 The New England Patriots aborted plans to have Tom Brady start and play in Thursday night's preseason game against the Chicago Bears at Gillette Stadium.

Brady sliced his thumb with a pair of scissors trying to pry something from his cleats before taking the field. It is not known if he required stitches, according to CNS New England.

A source confirmed the report and said that Brady "will be okay in time."

Coach Bill Belichick had said in his pregame interview on 98.5 The Sports Hub that the team would play all three quarterbacks, and earlier in the day, ESPN.com reported that Brady was expected to start.

But plans changed as kickoff approached, with just Jimmy Garoppolo and Jacoby Brissett taking the field for warmups.

Brady did not play in the team's preseason opener against the Saints after being excused to attend the memorial service of a family member.

The veteran quarterback will serve a four-game suspension to begin the regular season, as the team will turn to Garoppolo as its starter. This will mark the first season since 2001 that a quarterback other than Brady starts the regular-season opener for the Patriots.

Thursday night's game also will conclude a week of activity between the Bears and Patriots, as they conducted joint practices on Monday and Tuesday, while Wednesday they held a joint walk-through-style practice.

The Patriots have divvied up reps between both Garoppolo and Brady with the first-team offense throughout training camp and preseason. Brady will not be allowed to practice or be at the facility during his suspension, with the preseason marking his last extended action with his teammates until reinstatement in Week 5.
Related topics:
sportsespnpreseasonpatsthumbnflsliced thumbnew england patriotstraining camptom bradysuspension
Copyright © 2022 ESPN Internet Ventures. All rights reserved.
TOP STORIES
Temple students can no longer only wear cloth masks starting today
Grandmother of 5 returning home from work killed in hit-and-run
Loud noise from steam plant causing concern for South Philly neighbors
1 dead, 2 injured after convenience store shootings
Local Ukrainian community reacts to threat of war in country
Andy Reid, Chiefs advance after wild final 2 minutes and OT
5 tax changes that can boost your refund this year
Show More
1 dead, 4 injured after driver crashes into utility pole in Montco
Former CHOP patient becomes nurse at new King of Prussia hospital
Fauci optimistic omicron will peak in February
Woman finds $3M lottery prize in her spam folder
Embiid's double-double helps 76ers hold off Spurs, 115-109
More TOP STORIES News