The New Jersey Transit buses ran into each other, likely at high speed. One of the buses appeared to have broken nearly in half.


Traffic in the area was being diverted, and Baraka urged commuters to stay away from the intersection as officials worked to clear the street.


Jennifer Petrain was opening up a Starbucks about 100 yards from where the accident occurred. She said she heard a crash "like an explosion" and ran outside. She said she and a co-worker brought ice water, rags and a first aid kit.

The intersection was the first in the state, in 2009, to feature a surveillance camera designed to catch people running red lights. Then-Mayor Cory Booker conducted a demonstration in which he purposely rode through a red light. The program ultimately expanded to about two dozen towns and cities in New Jersey before it was discontinued in 2014 amid controversy and lawsuits.
Related topics:
newarknew jersey newsbus crashbus accident
Copyright © 2021 WPVI-TV. All Rights Reserved.
RELATED 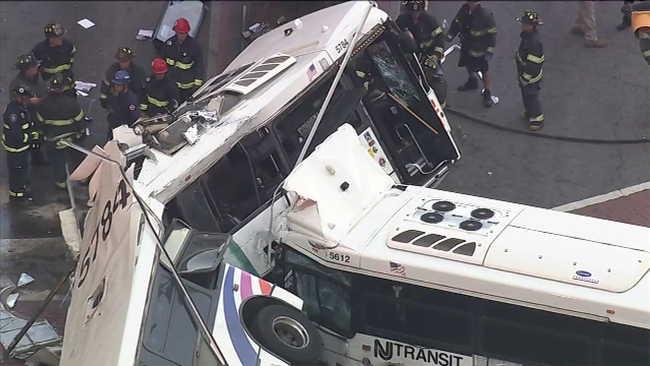