Final preps for likely wet Made in America concert 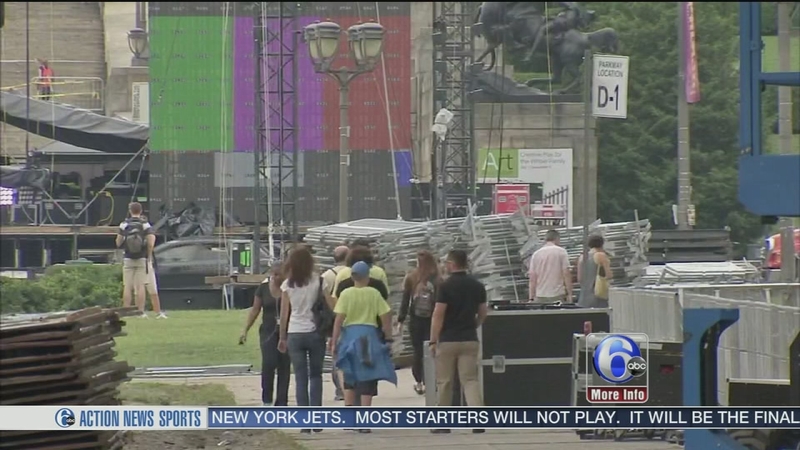 VIDEO: Made in American final preps

We're two days away from the first act set to perform at the Made in America festival on the Ben Franklin Parkway.

Heavy rain will likely also make an appearance, something the city and concert organizers are keeping a close eye on.

The lineup for the Philly's fourth MIA concert is pretty impressive with stars like Rihanna, Coldplay and Chance the Rapper scheduled to rock the stage Saturday and Sunday.

The @Budweiser #MadeInAmerica lineup by day is out now! Get weekend or single
day passes at https://t.co/m5ob0vYPQk pic.twitter.com/P4fzNVsTwN

Crews have been working around the clock along Parkway getting things ready for the tens of thousands who are expected to attend.

"It's definitely cool to see everything in action because it's behind the scenes, so it's definitely a big production and you get see how things work," Kimberly Corby of Mannyunk said.

Darryl Paris, a Live Nation employee who's helping with the setup, says while he will be working, this is a show he can't wait to see.

"I'll definitely be there," Paris said.

But there's another element that'll show up this weekend that'll test how loyal fans are - the weather.

"Mother Nature is Mother Nature. We just want to make sure that everyone is safe. Music fans generally don't mind the rain. If you go back to Woodstock and forward it was pretty muddy there, I don't think it's going to be muddy here. We are hoping that it holds off," Mayor Jim Kenney said.

The weekend will be wet and windy as Hermine moves up the east coast.

"Rain or shine I'm sure it's still going to be fine," Samantha DiGeorge of Fairmount said.

"As long as you're prepared, if you have a poncho, you are ready to go, then you can enjoy the concert," Corby said.

Paris says Mother Nature may rain on the concert, but it'll take more than some showers to shut it down.

The city is expected to release its contingency plan by Friday.