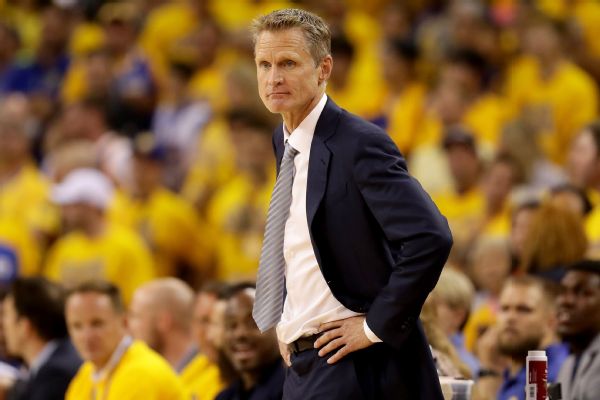 ESPN
By Chris Haynes
OAKLAND, Calif. -- Warriors coach Steve Kerr said on a CSN Bay Area podcast published Friday that he used marijuana for back pain he experienced the past two years.

"I guess maybe I could even get in some trouble for this, but I've actually tried [marijuana] twice during the last year and a half when I've been going through this pain, this chronic pain that I've been dealing with," Kerr told host Monte Poole.

"A lot of research, a lot of advice from people, and I have no idea if I would -- maybe I would have failed a drug test. I don't even know if I'm subject to a drug test or any laws from the NBA, but I tried it, and it didn't help at all. But it was worth it, because I'm searching for answers on pain. But I've tried painkillers and drugs of other kinds, as well, and those have been worse. It's tricky."

Kerr underwent two back surgeries last year, causing him to miss nearly the first half of the 2015-16 campaign, and complications caused him continuing discomfort.

The reigning NBA coach of the year went on to say in the podcast that he hopes professional sports league soften their stances on marijuana use, believing it is a better alternative to what players are being handed for pain today.

"I would hope so, and I'm not a pot person. It doesn't agree with me. I tried it a few times, and it did not agree with me at all. So I'm not the expert on this stuff. But I do know this: If you're an NFL player, in particular, and you got lot of pain, I don't think there's any question that pot is better for your body than Vicodin," Kerr, 51, said. "And yet, athletes everywhere are prescribed Vicodin like it's Vitamin C, like it's no big deal. And there's like this perception in our country that over-the-counter drugs are fine but pot is bad. Now, I think that's changing.

"You're seeing that change in these laws that you're talking about in different states, including California. But I would just hope that sports leagues are able to look past the perception. I'm sure the NFL is worried that their fans are going to go, 'All the players are potheads.'"

The NBA, in a statement, said: "All of our coaches are drug tested each season. Marijuana is included on our banned substances list. There are medical exceptions to our policy but, in this case, it's not relevant because Steve said he did not find marijuana to be helpful in relieving his back pain."

On Saturday, Kerr said he was surprised by the attention his comments received.

"The conversation was really about pain relief in professional sports," he said. "The context of our conversation and my response to your question was about how professional sports should handle pain relief for players. I thought it was ... interesting. Because of the way the world works, the way the media works, what is a very serious conversation about pain relief turn into the headline, 'Kerr smokes pot.' So, I guess that's the world we live in. That's fine. But I'm actually kind of glad it became an issue. It's a very important issue to talk about. Having gone through a tough spell over the last year with my own recovery from back surgery, and a lot of pain, I had to do a lot of research. You get handed prescriptions for Vicodin, Oxycontin, Percocet, NFL players, that's what they're given. The stuff is awful. The stuff is dangerous. The addiction possibility, what it can lead to, the long term health risks. The issue that's really important is how do we do what's best for the players."

"I've never been a guy who has done it, period," Green said. "So, I can't say that I know much about it, but from what I hear from whether it's football guys, I think a lot of them to do it because of all the pain that they go through.

"And when you read Steve's comments, it makes a lot of sense. When you look at something that comes from the earth, any vegetable that comes from the earth they encourage you to eat it. So, I guess it does make a little sense as opposed to giving someone a manufactured pill. If something takes your pain away like some of these pills do, it can't be that good for you."

Coaches are subject to one drug test per season during training camp, with different thresholds for what is considered a positive test. NBA players who test positive for recreational drugs such as marijuana are not disciplined until their third failure.

In an interview with GQ from 2014, NBA commissioner Adam Silver gave his thoughts on marijuana use among the league's players.

"We're much more concerned about [human growth hormone] testing and designer performance-enhancing drugs," he said. "This is a policy matter, and it's our strong preference that our players do not consume marijuana. We believe it will affect their performance on the court. That said, marijuana testing is something that's collectively bargained with the players' association, and we adjust to the times."

Kerr said he thought it was only a matter of time before bans on marijuana are lifted and accepted socially. He feels strongly that it would be more beneficial, rather than a performance and health detriment.

"Again, without being an expert on it, but I know enough, especially over the last couple of years having gone through my own bout with chronic pain, I know enough about this stuff. Vicodin is not good for you. It's not. It's way worse for you than pot," Kerr said.

Green added that Kerr's revelation and comments may spur debate on the usage of marijuana.

"The only thing I can really think of is that it's from the earth. It's grown form the earth," Green said. "So, maybe it is better than a Vicodin like he said....It usually takes a guy like Steve to do something like that to where it even starts the conversation. And then you start the conservation, stuff is still at least three or four years out. Who knows."
Related topics:
sportsespngolden state warriorsdraymond greenmarijuananbasteve kerr
Copyright © 2020 ESPN Internet Ventures. All rights reserved.
More Videos
From CNN Newsource affiliates
TOP STORIES