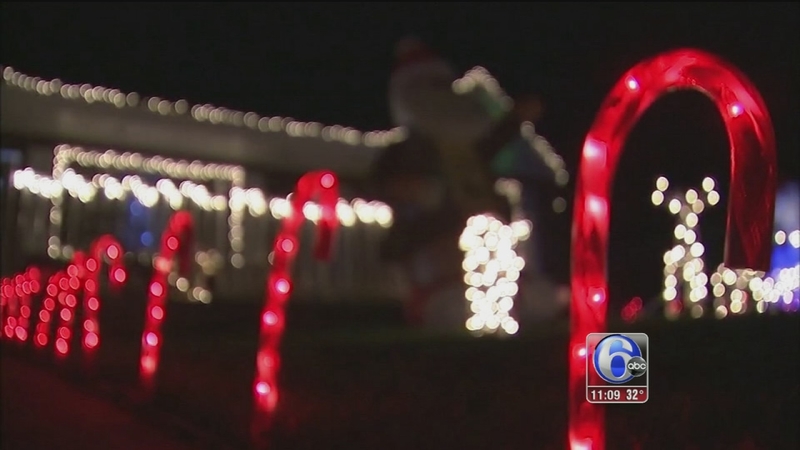 EVESHAM TWP., N.J. (WPVI) -- It's the holiday season, and a lot of people put their heart and soul into their Christmas decorations outside their homes.

But Wednesday morning, he came out and saw it was gone, the thief leaving behind only the extension cord and the plastic anchors that secured it to the ground.

"It's pretty depressing, actually, to be honest. To think that somebody would go around and steal somebody's Christmas decorations just kind of ruins the spirit of the season I think," said Norcross.

And he's not alone. That same night around the corner, in the 100 block of Munger Avenue, Ami Payne had an 8-foot tall inflatable teddy bear. The next morning, it was gone.

"I think it's terrible, and I think it's just a horrible thing to happen at the holidays," said Payne of Evesham Township.

If that wasn't bad enough, a few houses down, someone vandalized the Christmas display at the home of Flex Moreno and family.

"Some candy canes and a few of the reindeer had a few cuts to the wires. The electrical wires were cut. ... I think they think it's a joke," said Moreno of Evesham Township.

Evesham Township police say they've seen a significant increase from prior years in criminal mischief and theft of Christmas decorations.

"Right now, we're about a dozen reported, but we believe easily you could double or triple that number from homeowners who haven't reported it and it's really been throughout the entire township," said Evesham Township Police Lt. Joseph Friel.

Despite the humbug of humbugs trying to ruin Christmas, folks are trying to keep their holiday spirit high.

"I know I have the holiday spirit, and I know my neighbors do, but I guess there's a few little grinches that think it's fun and games to go out and snip wires," said Moreno.

Police are urging people to keep an eye out on their decorations and that of their neighbors. And if they see something suspicious or someone they haven't seen before in the neighborhood, give them a call and let them check it out.
Related topics:
eveshamnew jersey newsvandalismchristmas
Copyright © 2021 WPVI-TV. All Rights Reserved.
More Videos
From CNN Newsource affiliates
TOP STORIES