Rams' John Fassel on Jared Goff: 'Don't have to fight for the extra yard' 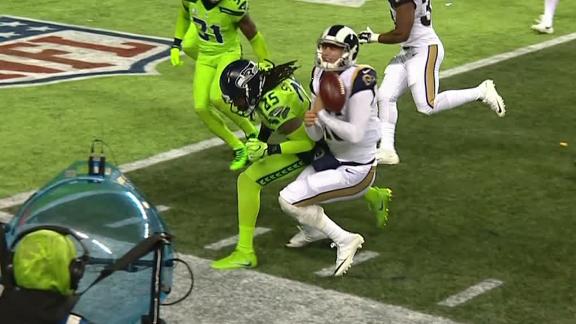 SEATTLE -- Los Angeles Rams running back Todd Gurley had a message for Jared Goff in the aftermath of a 24-3 loss to the Seattle Seahawks: "Leave the running to me."

Goff, the 2016 No. 1 overall pick, absorbed a hit to the helmet from cornerback Richard Sherman in Thursday's fourth quarter, prompting Goff to exit the game and be placed in the concussion protocol. Goff was talking casually with his teammates postgame and Gurley said he "was fine."

"He seemed OK, but he's probably tough enough to disguise it," Rams interim coach John Fassel said. "He's in the protocol, so we'll see how it is."

With his team trailing by 21 and about nine minutes left in the game, Goff ran 15 yards up the sideline, taking the ball to the Seahawks' 2 before being knocked out of bounds on Sherman's vicious hit. Goff also took a big hit while running in for a touchdown late in Sunday's 42-14 loss to the Atlanta Falcons.

His most recent run was called back because of a hold by right guard Andrew Donnal, giving the Rams their sixth penalty of the game. Goff was promptly taken out, replaced by former starting quarterback Case Keenum.

Sherman explained that the Seahawks were in man-to-man coverage when Goff scrambled out of the pocket. Sherman ran full speed at Goff, but thought he was going to step out of bounds to avoid the hit. But then Goff went for it all.

"He looked like he was setting up to take a dive into the end zone for a touchdown," Sherman went on, "and we don't give free meals, so he had to feel it."

Rams cornerback Mike Jordan, filling in for an injured E.J. Gaines, also suffered a concussion while trying to bring down Seahawks running back Thomas Rawls in the third quarter. That prompted Troy Hill to come in and get beat badly off the line of scrimmage by Doug Baldwin for an easy touchdown.

The scariest was Goff, though the 22-year-old never wanted to come out in the first place.

The Rams, at least, won't have another game for 10 days.

"Love the toughness; he's super tough," Fassel said. "But it seems like a lot of rookie quarterbacks just need to learn to slide or get out of bounds."

Goff evaluated for concussion after taking a bit hit from Sherman
Seahawks cornerback Richard Sherman lays a big hit on Rams rookie quarterback Jared Goff, who leaves the game and is evaluated for a concussion.