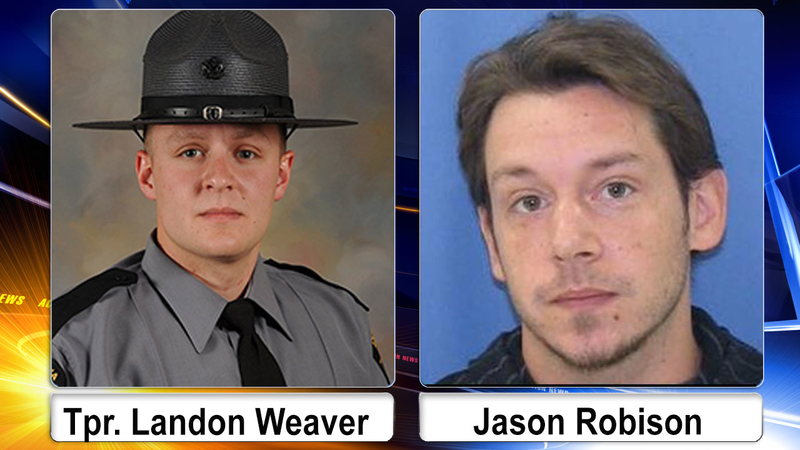 HESSTON, Pa. -- The suspect in the fatal shooting of a first-year Pennsylvania State Trooper was shot and killed after making threats to police, who located him Saturday morning, authorities said.

Trooper Landon Weaver, 23, was killed responding to a domestic complaint Friday evening in a rural area in Huntingdon County, in central Pennsylvania.

An overnight manhunt for the suspect ended Saturday morning when police found 32-year-old Jason Robison at an unoccupied mobile home in the area, authorities said.

Cpl. Adam Reed, a state police spokesman, said Robison refused orders and threatened officers on the scene, leading police to shoot him. His death was confirmed at about 10:30 a.m.

Weaver was responding to a reported violation of a protection-from-abuse order when he was shot. Details of that complaint were not immediately available, and Reed did not immediately know who owned the home where Weaver was killed.

The search for the suspect was focused on an area around the home and nearby Raystown Lake.

Weaver, originally from East Freedom in Blair County, was assigned to a patrol unit with Troop G in Huntingdon. He had joined the department in December 2015 and had graduated from the police academy in June. His survivors include his wife, Reed said.

Gov. Tom Wolf in a statement said Weaver will be remembered for "his bravery, his sacrifice, and his willingness to serve."

Weaver was the 97th member of the Pennsylvania State Police to be killed in the line of duty.