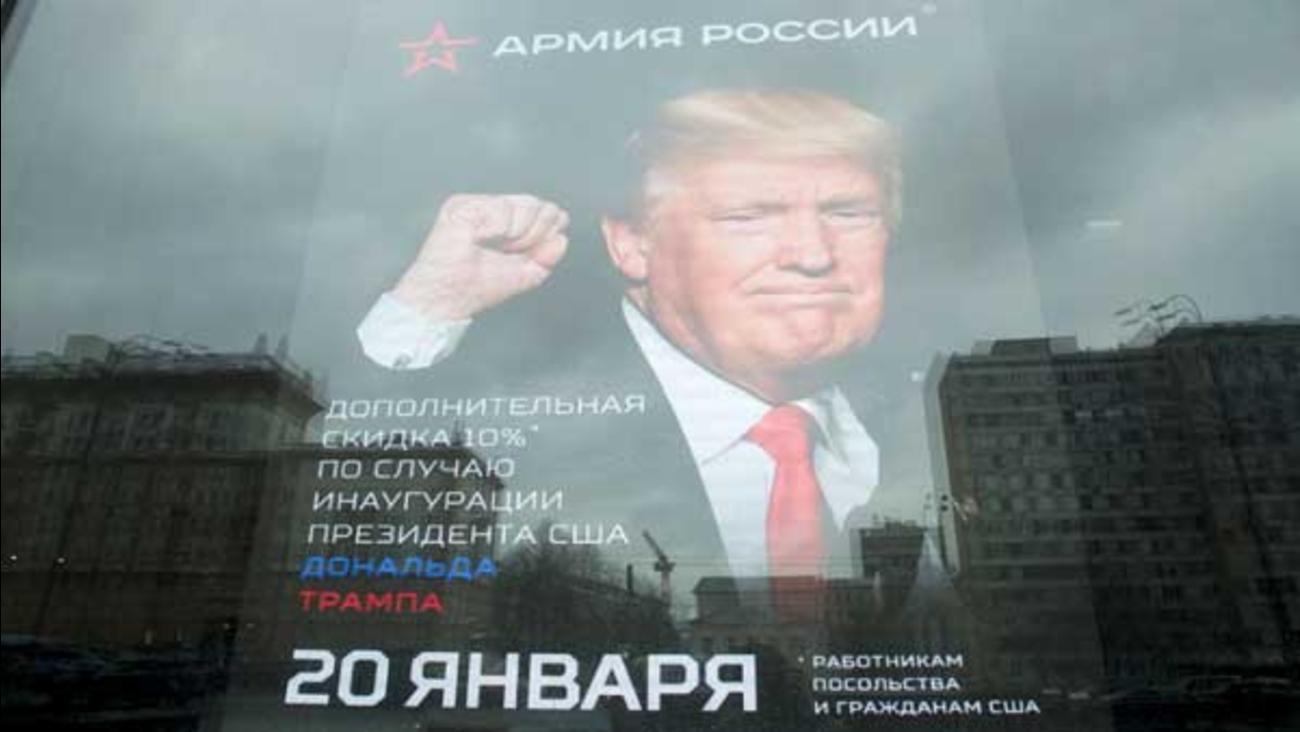 MOSCOW -- Russian officials and lawmakers lauded Donald Trump's inauguration Friday, hoping it will herald a period of better ties with the United States, while revelers in Moscow and elsewhere gathered for celebrations as bar and club owners sought to cash in on public excitement.

Trump's promises to fix ravaged relations with Moscow have elated Russia's political elite following spiraling tensions with Washington over the Ukrainian crisis, the war in Syria and allegations of Russian meddling in the U.S. elections.

While Trump's policy toward Russia is unclear yet, Prime Minister Dmitry Medvedev said that "we are hoping that reason will prevail."

"We are ready to do our share of the work in order to improve the relationship," Medvedev said on Facebook.

Trump's praise for Russian President Vladimir Putin has raised expectations that he could move to normalize ties, though Trump hasn't articulated a clear policy and some of his Cabinet nominees have made hawkish statements on Russia.

Dmitri Trenin, director of the Carnegie Moscow Center, predicted that Moscow will face a pragmatic but very tough partner in Trump.

"Russia's potential is incomparable to that of the United States," he said, adding that Moscow will have to apply a lot of skills "to play from the position of weakness and not lose."

Despite the uncertainty, many Russians looked at Trump's presidency with high hopes, and some nightclubs and bars staged parties to celebrate the inauguration.

Willi Tokarev, 82, a singer who emigrated to the U.S. in the mid-1970s and later became a music legend in Russia, topped the entertainment bill with his song "Trumplissimo America!"

"Trump, Trump, symbol of America. Trump, Trump, he's really president," the mustachioed Tokarev sang on a tiny stage with Russian and American flags hanging behind him.

Across from the U.S. embassy compound in central Moscow, the Russian Army store put up a poster with Trump's picture, offering inauguration day discounts of 10 percent for Americans.

There is a broad feeling in Russia's political and business elites that relations with Washington can't get any worse.

"Russia hopes that under Trump there will be no ideology, no attempts to lecture about democracy, human rights and rights of smaller nations around its borders ... but primarily deal with economic issues in a businesslike way and even tacitly divide spheres of influence," said Alexei Arbatov, a senior researcher with the Institute of World Economy and International Relations, a government-funded Moscow think-tank.

"Putin and Obama spoke different languages, they didn't understand one another. There is a hope that Trump and Putin will speak the same language, even though their positions may differ."

Speaking at the World Economic Forum in Davos, Switzerland, Russian Deputy Prime Minister Igor Shuvalov voiced hope that Trump will work with Putin on solving the Ukrainian crisis and other problems, but warned against expectations of quick progress. "Difficulties will remain," he said.

In the Kremlin-controlled parliament, many expressed similar expectations that Trump will be driven by pragmatic interests.

Leonid Slutsky, the head of the foreign affairs committee in the lower house of parliament, expressed hope that Trump will move to establish constructive ties with Moscow, but cautioned that there is no "magic button" to instantly achieve that. "We expect a slow but steady revival of our relations," he said.

Many ordinary Russians appeared to share expectations of a thaw in U.S.-Russian ties. "I hope that everything will be good and we will be friends as always, as it was before," said 52-year old Elena Tetyorkina from Norilsk in the Far North.

Medvedev, who served as president in 2008-2012 when Putin had to shift into the premier's seat due to term limits, presided over a period of warmer ties during Obama's first term. Medvedev sharply criticized the outgoing administration for ruining relations with Moscow by attempting to treat Russia like a "banana republic" and relying on "brute force and sheer pressure" in its dealings with Moscow.

"Conclusion: The Obama administration has destroyed relations between the United States and Russia, which are at their lowest point in decades," Medvedev said.

He denounced the sanctions the U.S. and its allies imposed on Russia over its action in Ukraine, saying that "it doesn't get any dumber than restricting entry to the United States for the leadership of the Russian parliament, ministers, and businessmen, thus deliberately reducing the possibility of full-fledged contacts and closing the window to cooperation."

Senior Russian lawmakers spoke with disapproval about anti-Trump protests and criticized CNN for recently discussing what would happen if Trump and Vice President-elect Mike Pence were assassinated on inauguration day.

"That atmosphere shows us the flaws of Western democracy, particularly in the United States," flamboyant ultranationalist leader Vladimir Zhirinovsky said in parliament.