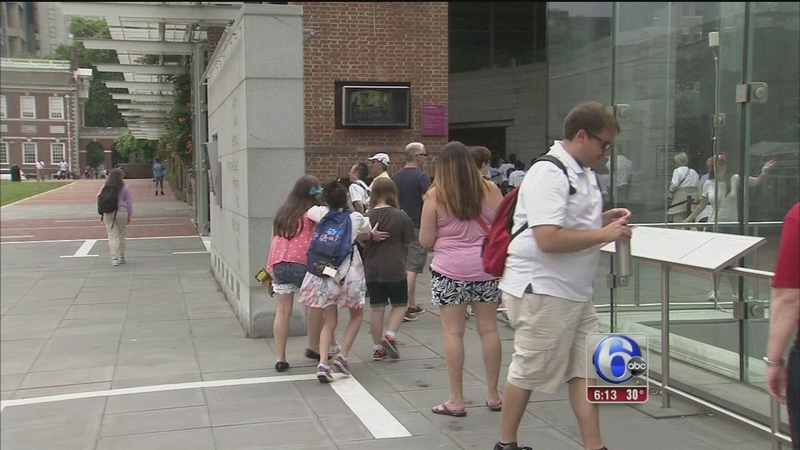 INDEPENDENCE HALL (WPVI) -- Independence Hall, the birthplace of the nation, along with the Liberty Bell and Independence Mall. Nearly 5 million tourists are drawn here every year, pumping hundreds of millions of dollars into the local economy.

Since March 1, fallout from the White House hiring freeze is forcing tourists to have to walk the equivalent of two blocks to find a public restroom. Restrooms right across the street from Independence Hall have been closed. There's no one to clean them, creating quite a spectacle inside the Hall where the Continental Congress met.

Already shutdown are tours of the Ben Franklin Museum and old print shop at 3rd and Chestnut, and Dolly Madison's home at 3rd and Walnut. The recreated boarding house where Thomas Jefferson wrote the Declaration of Independence is also closed for the distant future, and all this comes before the president presents his budget.

"Who knows what's going to come tomorrow. I mean tomorrow we're supposed to get the numbers for the budget, and everything we've seen, from a union standpoint, we're on the hit list. The EPA is No. 1. I think we we're No. 5," said Fitzpatrick.

Old City is the leading tourist attraction in the five-county area. All this federal budget uncertainty is generating a lot of anxiety among local tourism promoters.

"It is a difficult situation for the Park Service, and I don't know what the resolution is or if that's in site, but hopefully they will get it fixed before the spring and summer when people are there in great, great numbers," said Paula Butler, Visit Philadelphia.

The first Trump budget proposal is scheduled to be released Thursday. Leaks about his spending plans have had federal employees around here on edge for months already.