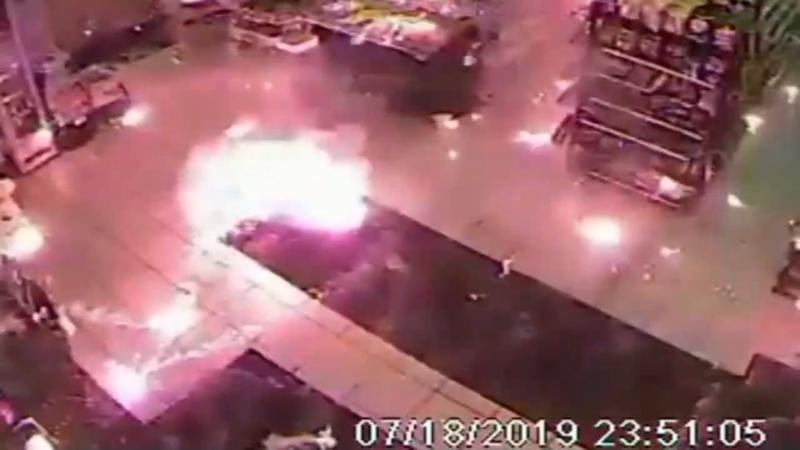 PHILADELPHIA (WPVI) -- Philadelphia police are looking for two suspects responsible for an explosion at a Mayfair gas station.

Surveillance video released by police on Friday morning shows the July 18 blast, that occurred right before midnight at 6300 Frankford Avenue.

According to investigators, the two males were causing a disturbance. Police said the argument started over whether or not a $2 bottle of iced tea was paid for.

As they were leaving, one suspect held the door open while the other threw an incendiary device inside.

Suspects sought for explosion at Philly gas station. See raw video of the incident on July 29, 2019.

"Theydon't seem to be fearful, but that's going to change," said Lt. Rosenbaum, "these are very serious charges, a lot of felonies, you have arson."

Surveillance cameras both inside and outside the store shows the blast and resulting fire.

The owner of the convenience store said these men have threatened to burn his store down before.

"Not one time, two, three times they tell me we're going to burn your store," said Mamraj Singh, owner of Express Fuel.

There were customers outside pumping gas during the explosion.Residents who come here everyday said they're worried this could escalate.

"The youth around here, they hang out here, they loiter, they beg, it's out of control," said Terrelda Jones, from Northeast Philadelphia.