WPVI
CENTER CITY (WPVI) -- A fire in Center City Philadelphia Thursday night sent residents from their homes and fire officials looking for a cause.

Around 11:30 p.m. more than 20 residents along South 9th and Lombard streets woke up to either the fire alarm or firefighters loudly banging on the doors and windows of just over a dozen apartments units.

"I woke up to the fire alarm going off and firemen in the hallway. There was a little bit of smoke in the hallway when I walked down. That's when I evacuated the building," resident Samantha Rosenberg said.

Matt Bechtel said firefighters told him there was a fire a few buildings away.

"And that we should evacuate because there may be some concern for carbon monoxide," Bechtel said.

Firefighters quickly arrived on scene to battle the stubborn blaze that took more than two hours to put out.

Fire authorities say the flames spread throughout the walls increasing the chances of hot spots that could easily flare up.

Residents stood outside for hours watching their apartments be doused in water. They knew to expect fire, water, smoke damage or all of the above which would leave little to salvage.

The fire marshal carefully inspected each room of a third story apartment unit, which sustained the most damage, looking for the cause of the fire. Residents wouldn't be able to get inside until the investigation on scene wrapped up, meaning they'd have to wait until at least late afternoon.

Two of the apartments have been deemed uninhabitable, with a resident saying that his basement apartment sustained significant water damage.

Boy saves family after home goes up in flames

Study: Wildfires produced up to half of pollution in US West 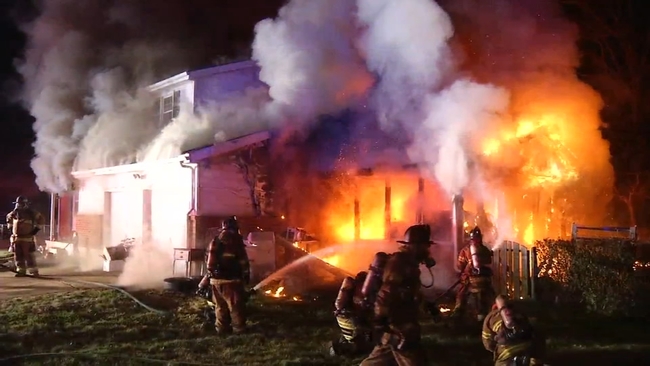