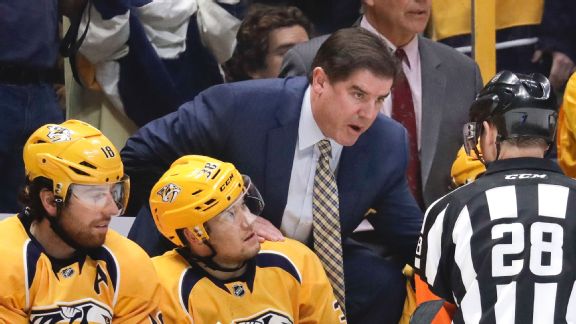 When the Nashville Predators take the ice against the defending champion Pittsburgh Penguinson Monday night in Game 1 of the Stanley Cup Final, Peter Laviolette will become just the fourth coach in NHL history to get there with three different teams, joining the elite company of Dick Irvin, Scotty Bowman and Mike Keenan.

Asked what that accomplishment means to him after the Predators beat the Anaheim Ducksin six games inthe Western Conference finals, Laviolette quipped, "It probably means that I got fired a lot."

Three times, to be exact.

But according to two players who played for Laviolette in each of his last two Stanley Cup Final appearances --Rod Brind'Amourwas captain of the Carolina Hurricanes when they won their only Cup in 2006, andDaniel Brierewas thePhiladelphia Flyers'leading scorer when they reached the Final in 2010 in a six-game loss to the Chicago Blackhawks-- Laviolette's ability to say just the right things at just the right times makes him one of the NHL's best bench bosses.

"He's so good at making you believe that, for one game, you can beat anyone on any given night," Briere told ESPN.com. "There were many speeches he gave when I would leave the room with goosebumps all over my body. I wanted to go out and rip the hinges off the door to get on the ice. Even though I wasn't a physical guy, his speeches made me want to play so hard.

"I've had coaches who will talk to you, but they just can't translate that passion. Lavvy was always emotional during the games, in practice and in between periods, and his words always came from the heart."

Now with his fifth NHL team and fourth as a head coach, Laviolette, 52, ranks second in NHL wins by an American coach with 518 (John Tortorella is first with 530), and is widely regarded as a players' coach. That was not always the case, according to Brind'Amour, who captained the Hurricanes to their only Stanley Cup, in 2006. After being fired in 2003 by general manager Mike Milbury after getting the New York Islanders into the postseason two straight years, Laviolette was hired by the Hurricanes to replace Paul Maurice midway through the 2003-04 season.

"When I first met Lavvy, really, I did not like him one bit," Brind'Amour recalled. "He came in in the middle of the year. I think he thought he had to be different than the way he was in New York, where he was known as a players' coach. He came in and was a real hard-ass. He walked around grumpy. I think he thought he had to show who was the boss. He rubbed us all the wrong way, especially me, to be honest with you."

The Hurricanes finished six games under .500 that season, with 76 points, and failed to make the playoffs. But after a labor dispute wiped out the entire 2004-05 season, Laviolette returned to Raleigh a different coach for the start of the 2005-06 season.

"When we came back from the lockout, he was a different guy and we all just rallied around him," Brind'Amour recalled. "He was one of those coaches you just loved to play for. He had this unique way of making everybody on the team involved and make us feel we were a part of it, no matter what our role was. That's a special gift, and I think that's what you're seeing in Nashville now. No matter how many minutes they're playing, everybody feels like a part of it, and I think that's a gift as a coach."

The 2005-06 Hurricanes won the Southeast Division with 112 points and were heavily favored against the Montreal Canadiens in the first round of the playoffs. But after allowing 12 goals in a pair of losses to open the series, Laviolette called on his captain to discuss a goalie change.

"I remember him pulling me into his office, which he never did," Brind'Amour said. "We never really had private meetings. And he asked me if he should make a change in the goalies. Our goaltender, Martin Gerber, [had been] phenomenal all year. He was thinking of making the switch and he asked me how I thought the team would take it. We were behind every move Lavvy had made throughout the year, and I just said, 'Whatever you think, Coach. We're behind you.'"

Cam Ward replaced Gerber, and the Hurricanes went on to beat the Canadiens in six games, then the New Jersey Devils in five games in the second round, the Buffalo Sabres in seven games in the conference finals and the Edmonton Oilers in seven games to win the Stanley Cup.

"Cam Ward wound up winning the Conn Smythe that year, so, obviously, Lavvy knew what he was doing," Brind'Amour said.

After failing to return to the playoffs the following two seasons, Laviolette was fired by the Hurricanes midway through the 2008-09 season, and after a year out of hockey, he was hired to replace John Stevens in Philadelphia in December 2009.

"It was a complete turnaround," Briere recalled of the coaching switch. "They were both players' coaches, but John Stevens was a lot more mellow and our practices had a little more work on systems. And then Peter Laviolette arrived, and his practices were all about intensity and going all-out at a very fast pace. For us, it was a complete turnaround from what we were used to."

The Flyers struggled to play at the pace Laviolette demanded and suffered an 8-2 home drubbing at the hands of the Washington Capitals in his first game behind the bench. They turned things around in February, but struggled down the stretch and entered the final game of the regular season needing a win against the New York Rangers to clinch a playoff berth. The Rangers also needed a win to get into the postseason.

On the day before that game, Laviolette summoned his top five shootout players into the video room and showed them clips of Rangers goaltender Henrik Lundqvist in shootouts. He then asked each of those players to hit the ice and practice one move they could use against Lundqvist.

"He was very aware the Rangers were one of the top shootout teams in the league and we were probably the worst," Briere said.

As fate would have it, the Flyers and Rangers were tied after regulation. Claude Giroux and Briere scored on two of the Flyers' first three shootout attempts and Brian Boucher stopped Olli Jokinen in the final attempt to send the Rangers home for the summer and the Flyers into the playoffs.

"To this day I consider Lundqvist the toughest goalie to score against in a shootout, so to beat him at one of the best parts of his game was pretty amazing," Briere said. "It was very clever on Lavvy's part."

The other coaching move that stands out in Briere's mind came in Game 7 of the Flyers' second-round series against the Boston Bruins. The Flyers had stormed back from a 3-0 series deficit to force a Game 7 in Boston, but had fallen behind 3-0 in the first period, and TD Garden was shaking with collective delight.

"We thought they would be shaking in their boots in Game 7, but they took it to us early on," Briere said. "I was losing it. I was so mad when it was 3-0 that I couldn't even think straight."

Laviolette called a timeout, and when Flyers goaltender Michael Leighton skated toward the bench, Laviolette ordered him back into his net, told him not to allow another puck past him, and then attempted some amateur psychology on the rest of his players.

"He calmed us all down and made us believe and realize all we needed was one goal," Briere said.

James van Riemsdyk netted a goal before the end of the first period, and the tide turned dramatically after that, with Scott Hartnellscoring and then Briere tying the game in the second period and Simon Gagne winning it in the third.

"Lavvy knew that once we scored that first goal it was the beginning of the end for them and that they were going to be afraid to play," Briere said. "That's what happened in the second period; they didn't want the puck. When we tied it up at 3-3, we knew we had them on the ropes and it was just a matter of time. You need a good leader in times like that, and Lavvy was a master."

A little more than three years after taking the Flyers to the Final, Laviolette was fired just three games into the 2013-14 season. At the conclusion of that season, Predators general manager David Poile gave Laviolette his fourth job behind an NHL bench. Now in his third season in Nashville, Laviolette is back chasing another Stanley Cup with a whole new group of players.

Briere and Brind'Amour said that if there is one thing that has not changed about Laviolette, it is that all of his teams play the same up-tempo style that forces opponents on their heels. They also know he is most comfortable playing the role of underdog.

"If you look at the success he's had, it has been with veteran teams," Brind'Amour said. "I'm actually shocked that he's bounced around the way he has, but that's the nature of sports, especially hockey.

"His greatest ability is managing people, and that is what coaching is all about. X's and O's are fine, but at this point of the season you have to get guys to another level and have them committed 100 percent to the guy beside you. I think that's where he excels. He spends the entire year creating a family atmosphere. You play harder and work harder for the people you care about and, to me, that's what the Predators look like -- a family."

"What I see is a team that really believes in itself, like we did back in 2010, and I credit the coaching staff of Lavvy, Kevin McCarthy and Phil Housley," Briere said. "They're doing a tremendous job. Like most people, when I saw that they had to play the Blackhawks in the first round, I kind of had them written off right from the get-go. I should have known better with a coach like Lavvy behind the bench. That's his strength; that's when he's at his best, when nobody believes in him and his team. He got just what he wanted having to face Pittsburgh. He's an underdog again."
Related topics:
sportsespn2017 stanley cup finalspostseasondaniel brierestanley cup finalsphiladelphia flyersstanley cup playoffsrod brindamournhlpeter laviolettenashville predatorscarolina hurricanescoachplayoffs
Copyright © 2020 ESPN Internet Ventures. All rights reserved.
More Videos
From CNN Newsource affiliates
TOP STORIES