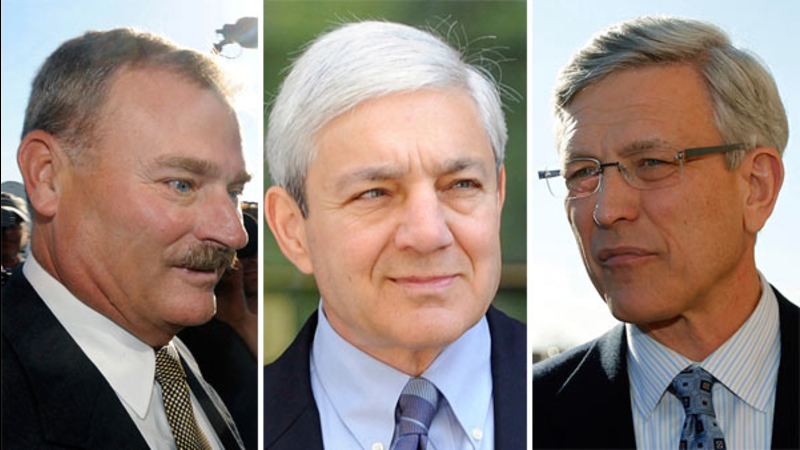 HARRISBURG, Pa. -- Penn State's former president and two other ex-administrators were sentenced Friday to at least two months in jail for failing to report a child sexual abuse allegation against Jerry Sandusky a decade before his arrest engulfed the university in scandal and brought down football coach Joe Paterno.

"They ignored the opportunity to put an end to his crimes when they had a chance to do so," Judge John Boccabella said as he lambasted the three defendants and the Hall of Fame coach over a delay that prosecutors say enabled Sandusky to molest four more boys.

Boccabella said he was "appalled that the common sense to make a phone call did not occur," a transgression that "sort of robs my faith of who we are as adults and where we are going."

Former President Graham Spanier, 68, was sentenced to four to 12 months, with the first two in jail and the rest under house arrest. He was convicted of child endangerment.

The three are to report to jail July 15.

They all apologized in the courtroom to Sandusky's victims before the sentences were hand down.

Spanier said he regretted that "I did not intervene more forcefully." Schultz said: "It really sickens me to think I might have played a part in children being hurt."

The case hinged on coaching assistant Mike McQueary's claim that he witnessed Sandusky - a retired member of the coaching staff who ran a charity for youngsters - molesting a boy in the team showers in 2001. Prosecutors said that after McQueary recounted what he saw, the three administrators decided not to report it to authorities to protect the university's reputation.

Sandusky was not arrested until 2011, after a prosecutor got an anonymous email tip. Sandusky was found guilty the next year of sexually abusing 10 boys and is serving 30 to 60 years in prison.

Penn State has paid out nearly a quarter-billion dollars in fines, settlements and other costs associated with the scandal, and the football program suffered heavy NCAA sanctions. More than 100 of Paterno's victories were briefly erased from the record books.

Both the judge and prosecutors Friday thrust blame onto Paterno himself. Paterno was fired but never charged with a crime; he died of lung cancer at age 85 two months after Sandusky's arrest.

Paterno "could have made that phone call without so much as getting his hands dirty," Boccabella said. "Why he didn't is beyond me."

Prosecutor Patrick Schulte said Curley at one point had drawn up a plan to report Sandusky to state authorities, but "something changed after talking to coach Paterno."

"What was it about that conversation that made you change your mind?" Schulte said, addressing the ex-athletic director.

All three men have denied they were told the encounter in the shower was sexual in nature.

Prosecutors reserved some of their harshest words for Spanier, with Laura Ditka saying he was "a complete and utter failure as a leader when it mattered most." She said his inaction "allowed children to be harmed."

The judge came down hardest on Curley, however, saying the sports department was his responsibility and questioning Curley's claims of memory lapses on the stand during Spanier's trial.

"I find it really hard to believe that he doesn't remember every detail of the most serious mistake he ever made," Boccabella said.