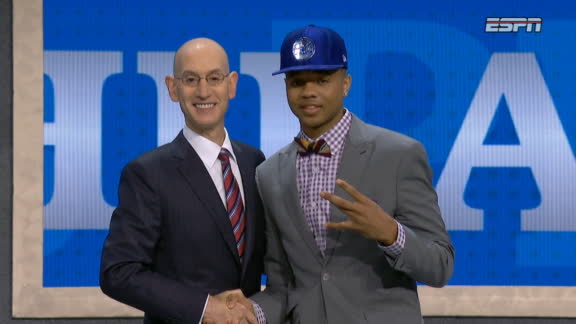 Markelle Fultzsaid during the draft process he wanted to be the top pick in the draft "really bad," and on Thursday the Philadelphia 76ers made that a reality.

Fultz, a 6-foot-5 point guard, is headed to Philadelphia after being selected with the No. 1 overall pick, which the 76ers acquired days earlier in a trade with the Boston Celticsto move up two spots from No. 3.

Fultz, who spent one year at Washington, is only three years removed from playing junior varsity basketball in his native Maryland. Now he will begin his NBA career a 2-hour drive away from home.

"When I heard my name called ... it was like God calling me," Fultz said after being selected.

In his one season with the Huskies, Fultz led all freshmen with 23.2 points, and also averaged 5.7 rebounds and 5.9 assists in 25 games, while showcasing top-pick talent despite playing on a team that finished a 9-22 campaign with 13 consecutive losses.

Asked Thursday night about the biggest misconception about him, Fultz said it was that he's "not a winner."

"I get tired of hearing that," he said. "Anybody that knows me knows how competitive I am. Look at my résumé through high school. I've been winning my whole life."

"He brings to the table a great athleticism," Philadelphia general manager Bryan Colangelo said Thursday night. "He is multitalented in terms of his offensive skill set. He gets to the basket, he penetrates, he's elusive, he can handle the ball. He's what you'd call your prototypical combo guard, a combo guard that can score in many ways, including shooting from the perimeter. It's an opportunity that we feel, just basketball-wise, playing alongside Ben Simmons, playing alongside Joel Embiid, Robert Covington, Dario Saric and others -- many others -- that it was the right player, the right piece to move this situation forward."

Embiid told ESPN's Josina Anderson on Thursday night that the Fultz pick was "a blessing" for the Sixers.

"He's the best fit for our team as a playmaker," Embiid said. "I like how humble he is and that he cares about winning a lot. That's what we need so we can finally change the culture here."

Fultz will join a Sixers core that is heavy on promise but light on NBA success. Thanks to the philosophy of the previous managerial regime, led by former general manager Sam Hinkie, the 76ers punted on immediate success to stockpile assets and build for the future. Dubbed "The Process," it has netted high-pick talents Embiid, Jahlil Okafor and Simmons. However, injuries have sidetracked the franchise from seeing how its young talent fits together.

Okafor has been the closest thing to an ironman of the incumbent Philadelphia trio, having played in 103 of a possible 164 games in his first two seasons in the NBA.

Conversely, Embiid missed the first two years of his career because of injury. Drafted No. 3 overall in 2014, Embiid didn't make his NBA debut until this past season, playing in only 31 games because of a combination of injury and a preemptive rest plan. In his limited action, Embiid showed true promise and has become the living embodiment of Hinkie's vision, having nicknamed himself "The Process."

Simmons, last year's No. 1 overall pick, missed the entire 2016-17 season because of a broken foot. As a result, he and Fultz will be the first teammates to be No. 1 overall picks and rookies at the same time.

"Where we were and where we are, and the pieces, the real people that you can actually touch, and the three people that we're mostly talking about now in Embiid and Ben Simmons and Markelle Fultz, the city has to feel fantastic," coach Brett Brown said. "I know the organization does."

Asked if he has been in recent contact with Hinkie, Brown allowed that he sent Hinkie a simple text message recently that read: "Thank you."

Fultz's selection at No. 1 makes Washington the first program to provide the first overall pick in both the NBA and WNBA drafts in the same academic year. Huskies senior Kelsey Plum was taken No. 1 overall by the San Antonio Stars in April's WNBA draft.

Information from ESPN's Tim McManus was used in this report.