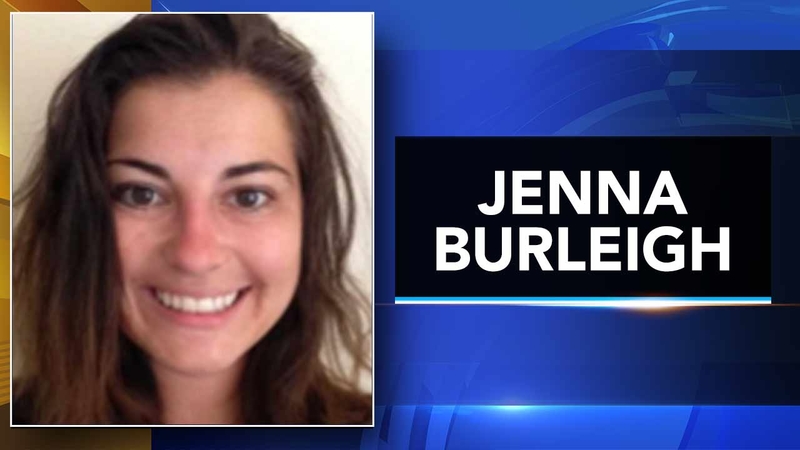 PHILADELPHIA (WPVI) -- Viewing and funeral details for a Temple University student who was murdered last week have been released.

A viewing for 22-year-old Jenna Burleigh will be held at the Williams, Bergey, Koffel Funeral Home at 667 Harleysville Pike, Telford, Pennsylvania on Thursday from 5 p.m. to 8 p.m.

Another viewing will take place from 9 a.m. to 10:30 a.m. Friday at Saint Maria Goretti Catholic Church at 1601 Derstine Road in Hatfield, Pa. prior to the funeral at 11 a.m.

On Monday, the Wayne County coroner said Jenna Burleigh, 22, died from blunt trauma and strangulation. The manner of her death was ruled a homicide.

Cause of death released for Temple student. Annie McCormick reports during Action News at 11 p.m. on September 3, 2017.

Philadelphia police have formally charged a man with killing Burleigh who had been missing since early Thursday morning.

Joshua Hupperterz, 29, was charged with murder early Sunday. He was also charged with abuse of a corpse, tampering with evidence, and possession of an instrument of crime.

Investigators said on Saturday he had admitted to elements of the crime.

Burleigh, of Harleysville, was last seen in the area of Pub Webb at 1527 Cecil B. Moore Avenue around 2 a.m. Thursday.

Pictured: Jenna Burleigh and a surveillance photo released by police showing Burleigh with the clothes she was believed to have been wearing.

Police believe Burleigh and Hupperterz had just met before they left from the bar. Investigators say there is no indication of a prior relationship between the two.

According to investigators, a detective contacted Hupperterz to ask him what he knew about Burleigh's disappearance.

Police said in a statement released Sunday morning, "Hupperterz informed him that he had been so drunk when he left the bar he had no recollection of who he had been with."

Burleigh was reported missing by her father, and the community was alerted to Burleigh's disappearance on Friday.

A video from Friday night shows police executing a search warrant at Hupperterz's apartment on the 1700 block of North 16th Street with a cadaver dog, and then the same investigators searched a residence in the 800 block of Cloverly Lane in Jenkintown, then finally to Paupack Township in Wayne County.

Police are investigating a home in Jenkintown in connection to a missing Temple University student.

"The allegations are devastating. We stand ready to work with the authorities in their investigation."

On Saturday afternoon, police discovered a body believed to be Burleigh on the lakefront property of Hupperterz's grandmother in Paupack Township.

Police believe Burleigh was murdered in Philadelphia, then her body was transported to the Jenkintown home, then to Wayne County.

Philadelphia police search an off-campus home as they question a man in the case of a missing Temple University student in September 2017.

Sources say Hupperterz's roommate told police he came home to cleaning products and it appeared someone tried to clean up blood.

Action News learned that after a search warrant was executed, blood and drugs were found inside.

Philadelphia Police Commissioner Richard Ross said, "We still have a lot of work to do to include trying to figure out, who else may have been involved."

Burleigh had just started at Temple. A longtime neighbor of the Harleysville native says she was always looking out for others.

"She was a great person, always happy, always energetic. She would advocate for anything you could think of, she was all about equality," said Julie Hiltner of Lower Salford Township, Pa.

Hupperterz is a former Temple student. Court documents show he was charged with DUI, theft and burglary in 2013.

Charges against other individuals are possible, police said.

Burleigh's father reacted to the news of her death on his Facebook page Saturday afternoon.

The school's president said Burleigh had just joined the Temple community this week as a junior transfer student from Montgomery County Community College, majoring in film and media arts.

In a statement, the Temple Student Government said:

Those that knew Jenna described her as "big hearted," "hilarious," "fiercely feminist," "unapologetically herself," and "an incredibly woke young woman." She spent much of her time combating racism and sexism, as well as defending the rights for LGBTQIA+ community.