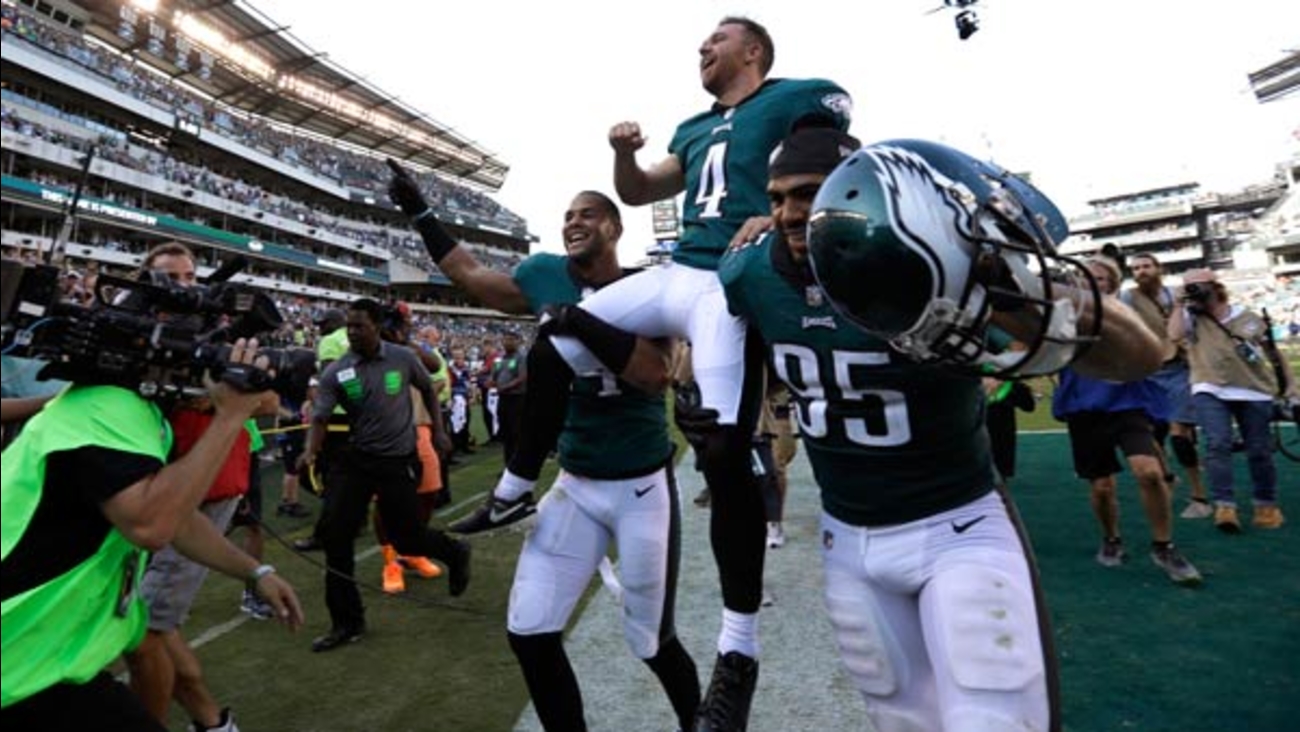 AP
By BERNIE WILSON
CARSON, Calif. -- The self-proclaimed "Fight For LA" is going poorly for the winless Los Angeles Chargers, who will be challenged by Philadelphia both on and off the field at their suburban soccer pitch on Sunday.

First, the Eagles (2-1) have a successful rookie kicker, Jake Elliott, who boomed a 61-yard field goal - the longest in franchise history - as time expired to lift Philadelphia to a 27-24 victory against the New York Giants.

The Chargers (0-3) have a rookie, kicker, too, Younghoe Koo, but he's off to a rough start. His missed a potential game-winning attempt from 44 yards in a 19-17 loss to Miami in the Chargers' home opener two weeks ago. In the season opener at Denver, his potential tying kick from 44 yards was blocked.

Then there's the matter of the crowds at the 27,000-seat StubHub Center, which the Chargers are renting for three seasons before moving into the stadium Rams owner Stan Kroenke is building in Inglewood.

StubHub, by far the NFL's smallest and priciest stadium, hasn't given the Chargers a home-field advantage after they bolted up the freeway after spending 56 seasons in San Diego. There were plenty of Dolphins and Chiefs fans for the first two home games, and there should be plenty of green in the stands Sunday.

"It's going to be different for all of us," Philly coach Doug Pederson said. "It's a smaller venue in that 27,000-30,000 range. It will be a little different. I don't want that to be a distraction for our football team, and for any of us going out there.

"But I do know that our fans do travel well, and they are all over the country and I would expect probably a good turnout for Eagle fans this weekend."

"I'm sick about the way I've played, I'm sick that we haven't scored enough points, but I'm super fired up about the way our defense is playing and continuing to hold teams," Rivers said. "I should believe that if they keep holding teams to 20, right in there, then we're going to win a bunch of games. If they keep them there, we're bound to win and hopefully that starts Sunday."

Here are some things to know about the Eagles-Chargers game in an MLS stadium:

REPLACING SPROLES: The Eagles lost their top game-breaker when Darren Sproles tore an ACL and broke a forearm on the same play against the Giants.

The veteran running back and punt returner began his career with the Chargers, so he would have been facing a handful of former teammates this weekend. Wendell Smallwood will get a bigger role on offense and Philadelphia signed Kenjon Barner to replace Sproles on the roster. Barner, who played with Sproles on the Eagles and was cut by the Chargers this month, might return punts. Torrey Smith also could fill that role.

CHASING RIVERS: After posting eight sacks in the first two games, the Eagles' fierce pass rush didn't take Eli Manning down. But Manning didn't give them a chance by getting the ball out of his hands quickly.

Eagles defensive coordinator Jim Schwartz said Manning released the ball in less than 2 seconds on 34 out of 52 pass plays. Rivers has been sacked only four times in three games and also has a quick release, so Philadelphia's front four may have a tough time getting to him.

"Everybody is a little bit different," Schwartz said. "It goes both ways. If you want to throw it that quick, you can't really get routes down the field."

INGRAM COMING ON: Chargers DE Melvin Ingram was named AFC Defensive Player of the Month for September after recording 5 sacks in the first three games, including a career-high three against the Chiefs.

It's exactly the impact play the Chargers were banking on when they gave Ingram a four-year deal potentially worth $66 million. He forms a fearsome pass rush with Joey Bosa, who has 2 sacks.

UNFAMILIAR FOE: Although Rivers is 2-0 against the Eagles, these teams play each other only once every four years.

"You're playing the Chiefs, we can write out that whole defensive front by name and all the DBs before you even turn on the tape," Rivers said. "When you're playing this team, you know a handful of the guys and then you just haven't played 'em so it takes you a little longer to get a feel for the actual guy. Not so much what they play and what coverages, more of the guy and what gives you the best chance as far as attacking those guys."

Said Chargers tight end Hunter Henry: "Big challenge. They just came off a big win with an incredible kick at the end of the game, so you know they're up and they're excited and their fan base is excited."

NEW DIGS, OLD PROBLEM: The Chargers have lost 26 of their last 35 games dating to the start of the 2015 season.