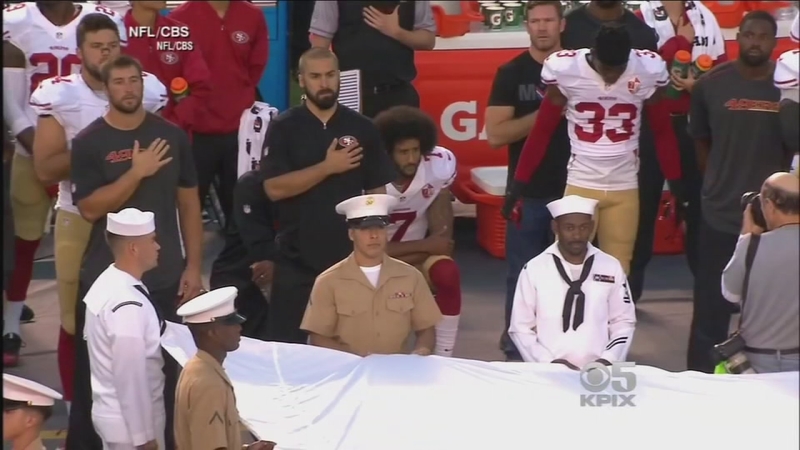 CENTER CITY (WPVI) -- A Philadelphia group is protesting what it calls an attempt to silence NFL players and their expression of their First Amendment rights.

The group, called the 10-22 Protest Committee, is calling on anyone who supports the efforts of Colin Kaepernick to boycott the NFL this coming Sunday.

Kaepernick is the former San Francisco quarterback whose decision to take a knee during the national anthem turned into a nationwide movement.

He has also filed a grievance against NFL owners, accusing them of blackballing him. Kaepernick has not been picked up by another team since leaving the 49ers.

Members of the 10-22 Protest Committee gathered outside Philadelphia City Hall Monday morning to announce the boycott and urge Philadelphia Eagles fans to participate.

The protesters refer to their initiative as a national "call-out," urging people to boycott the NFL this coming Sunday. They said they will be protesting outside the Linc when the Eagles play on Monday night.

Protest organizer, Supreme Dow, said he fully believes Kaepernick is being blackballed for starting, what turned out to be a national movement. Dow said he thinks the movement itself is larger than football.

"We support their efforts to bring attention to, and shed light upon, the devastating police brutality that has impacted the black community for so very long," said Dow.

Action News spoke with a few people about this issue outside City Hall Monday.

Many said they empathize with the former quarterback and support the movement.