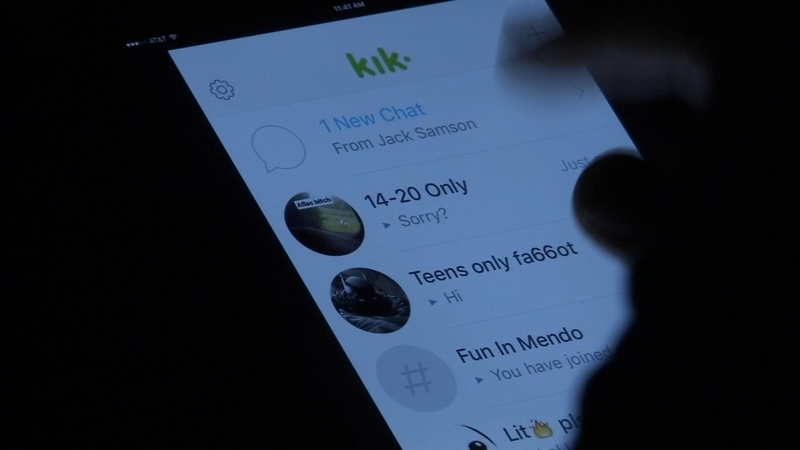 Police have called the Kik app a sexual predator's playground.

To find out how quickly a young teen might be contacted Action News recently posed as a 16-year-old girl on the app.

Within a few minutes older men were sending the account pictures that are too inappropriate for broadcast.

The sexual advances were eye-opening but paled in comparison to the horrific sexual assault of one teenage victim who liked Kik. Her legal guardian has a warning for parents.

"It's been very difficult, very heartbreaking," said a family member of the victim who asked to remain anonymous.

That victim was just 14-years-old when she joined Kik to socialize with other teens.

"He wooed her, was very nice to her and befriending her on this application," the family member said.

The two agreed to meet in a Delaware County park. But instead of meeting another teen, 40-year-old David Eugene Dewald was allegedly the man behind those Kik chats.

Authorities said he ordered the victim into his car, then drove four hours to Bloomsburg, Columbia County all the while forcing her to perform sex acts along the way, until they arrived at Dewald's apartment.

"Just got worse and she was scared out of her mind, she was then sexually assaulted," the family member explained.

The girl's family said he dropped her off but not before threatening to kill her if she told anyone. It's been a year and a half since the brutal attack.

"She cries herself to sleep to this day. She has PTSD. She is just a mess," they said.

Action News set up an account on Kik, with the screen name Litteen16, posing as a 16-year-old girl. Within an hour the account got bombarded by users that appeared to be older men.

The questions began with 'do you like older guys' or 'what are you wearing', but quickly turned sexual. And a few minutes' later pictures started rolling in of genitals and the men began asking the fictitious teen to send her own nude pictures or begin a live chat.

"There are predators out there just throwing their line, wherever they can, and sooner or later they are going to catch a fish," said Detective Sergeant Kenneth Bellis of the Internet Crimes against Children's Taskforce in Delaware County.

Detective Bellis' agency is part of a national network committed to bringing down child predators. His team arrested Dewald in May of 2016 as he tried to meet that same victim for a second time in Eddystone Park. Dewald allegedly told detectives, who posed as the girl, that when the meeting was set up quote "he said you know what you are going to do when I get you'.

And Bellis said their investigation uncovered more alleged victims of Dewald. He has plead not guilty and is currently awaiting trial.

"They are all over social media. Sometimes it's a full-time job for these guys, these offenders, that's all they do. It's a problem," Bellis said.

"He has ruined so many people's lives. He is a coward. He is pathetic," said the victim's family member.

Their message to parents is the same as investigators, check your children's phone or they too could face a long road of recovery.

"She is a bright, beautiful child who just really got caught up in a nightmare."

There are two ways we do this. One is through technology and constant improvements to the product itself. We encourage users to report content that they believe violates the Kik Terms of Service and Community Standards. Users are also able to Block other users they no longer wish to chat with, or ignore chats from people that they don't know. Actions are taken against users found to have violated Kik's Community Standards and TOS, including removal from the Kik platform where circumstances warrant.

The other is through education and partnerships with organizations that help adults and teens understand the challenges of today's online landscape and how to avoid bad situations. For years, we've had teams dedicated to this, and we will continue to invest in those types of tools, provide resources to parents, and strengthen relationships with law enforcement and safety-focused organizations.

This is a priority for us. We want all users to be safe on Kik and will continue to make Kik a safe, positive and productive place for our users to interact.
----------
For more news and updates to her investigations, be sure to follow Wendy Saltzman on Facebook.